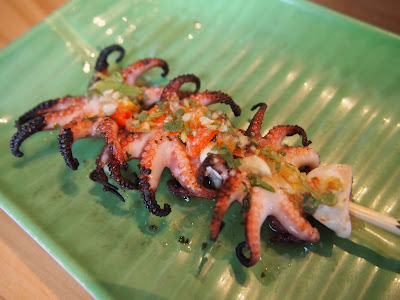 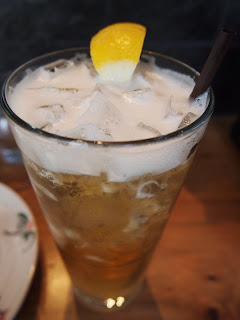 On my first day in Portland, Matt and I went to happy hour at PING, a restaurant featuring a blend of Asian snacks and bar food.
I started with a glass of yuzu beer, a drink consisting of Sapporo draft beer with yuzu extract & sugar. It reminded me of a shandy- very light and refreshing.
At Ping, they also have drinking vinegars made from their sister restaurant Pok Pok. I tried a the tart tamarind vinegar with soda. It was also excellent. 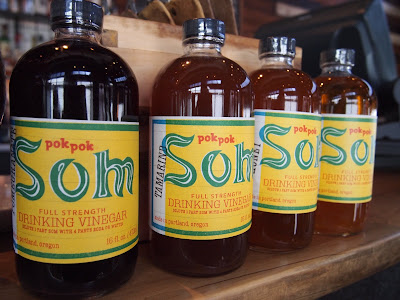 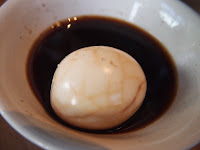 We ordered some snacks to tide us over until dinner time.
First up was a Chinese tea egg, a hard boiled egg made in black tea, soy sauce, ginger, star anise and cinnamon. It was a straightforward and faithful version of this snack.

My favorite item was the baby octopus skewer. They were marinated in lime, chilies, garlic, fish sauce, and cilantro. The flavor was a fantastic mix of sour, spicy, and savory. 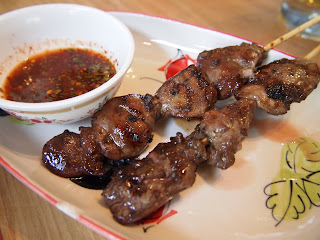 On special that day, they offered duck liver skewers. They came with a spicy dipping sauce.

I finished off with ju pa bao, a dish from Macau, that was simply a fried pork chop seasoned with salt, pepper & garlic served in a bun that's similar to a torta. It was simple and tasty. 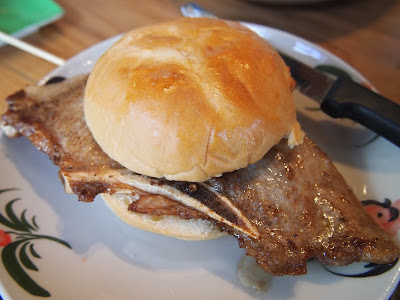