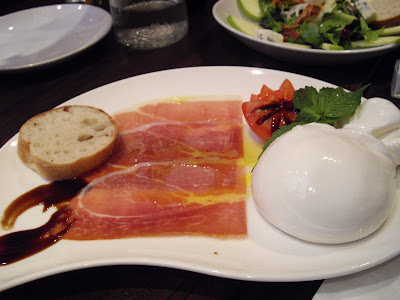 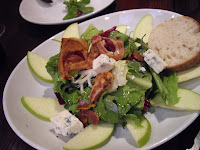 Last time we got together in the city with Petiteseour, she suggested going to Don Antonio's -- a midtown pizza place that her co-worker was a regular at.

The place was packed and we got seated in a cramped corner by the servers' station -- the first in a string of little annoyances that added up.  There was also red wine served chilled, plates piled carelessly in people's faces, grumpiness at requests like more bread, stuff taken away too quickly,

We started off with the homemade burrata, and a salad with pancetta, apples and gorgonzola.  Burrata was good (though not enough bread, nor balasamic);  salad was forgettable. 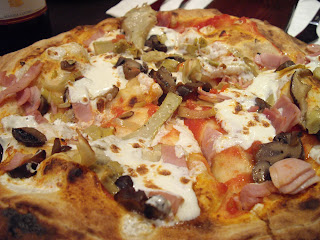 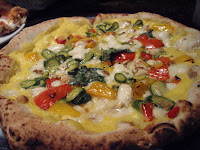 Then we order 3 pizzas for the 5 of us -- the Vesuvio, a stuffed pizza with fresh ricotta, mozzarella and salami inside, topped with red sauce, ham, more mozzarella, mushrooms, and artichokes;  the Pope's Pizza, with butternut squash, zucchini, roasted peppers, and smoked mozzarella;  and lastly was one of the day's special which sounded really good with gorgonzola dolce, a bunch of other cheeses, figs, and prosciutto, but was disappointing.  The figs were too sweet, the gorgonzola too strong. 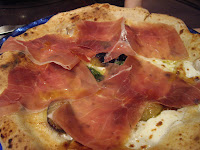 I liked the butternut squash and smokey flavor of the Pope's pie, but it was not a hit with Petiteseour.  Her favorite and Redneckhunter's favorite was the stuffed pie.  I liked the pizza, but Petiteseour thought it suffered from too much volume where the oven doors being constantly opened and closed and not retaining heat led to a less crisp crust.

What really struck me to not recommend the place was really the service -- all around crappy.  We learned that Petiteseour's friend tended to go on his own and sit at the bar - clearly the way to go - table service was subpar.

Return to the Knife and Fork Inn, Atlantic City, NJ 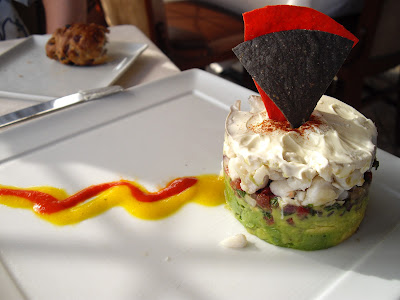 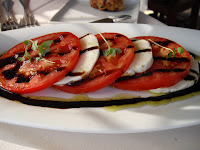 One thing we like about traveling to Tampa is flying in and out of Atlantic City airport. Nothing normally brings us to A.C. so it's only in transit that we get to eat at the Knife and Fork Inn.  Now 100 years old, the joint was an old haunt of Nucky Thompson, Frank Sinatra, Bob Hope and Vic Damone, and was in a scene in the movie "Atlantic City" with Susan Sarandon and Burt Lancaster. 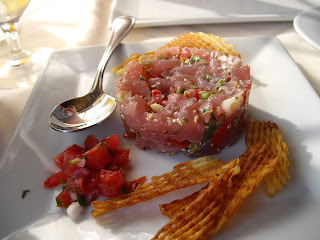 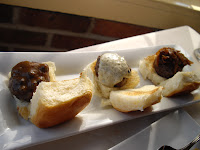 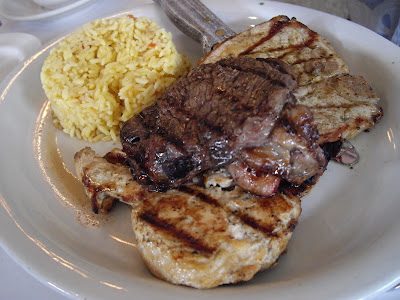 While we were in Tampa visiting Redneckhunter's brothers, we made a stop in Ybor City to pick up cigars before heading to the airport.  It took a while to find a cigar shop that was actually open at 11 am, despite any hours posted on shop windows - guess they're on Tampa time.  But when we did find one, Redneckhunter was very happy at his haul.  I decided to ask the proprietress where we should grab lunch - always happy to get a local's recommendation.

She directed us off the tourist-centric 7th Avenue, just a couple blocks away to 5th to the Argentine restaurant El Puerto.  The place was adjacent to another cigar store (where Redneckhunter picked up another 1/2 dozen cigars) and had chickens running around on the sidewalk outside -- both good signs. 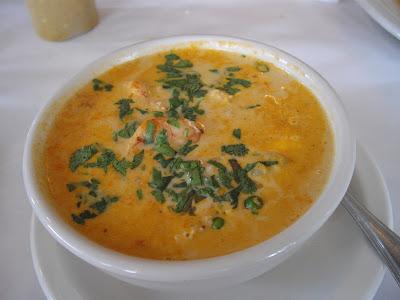 We got there a little before noon, and I'm glad we did because by 12:15 every seat in the place was taken, and we never would have made our flight in time!  Another good sign considering the restaurants on 7th Avenue had people out on the street trying to drum up lunch business.

I ordered the Chupe de Camarones - shrimp soup with potatoes, rice, shrimp, and a hard-boiled egg.  Redneckhunter got a lunch special - the Mini Parillada - Argentinean sausage, skirt steak, chicken breast, pork chop with a side of rice and beans.  I can't believe this was the mini version of the dish!

A great find, which hopefully we'll return too next time we're visiting family! 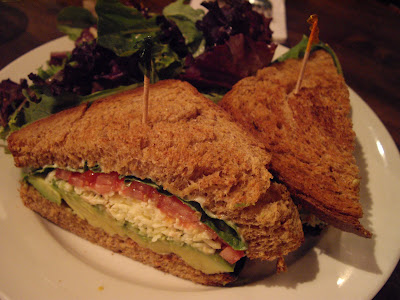 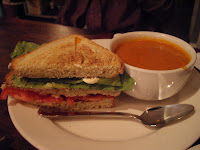 After rumors circulated in July about the closing of Upper West Side institution Good Enough to Eat, petitesoeur wanted to meet there for lunch before our girls' museum day.

So on a rainy Friday, we braved the line (perhaps others had heard the rumors too) and had a nice lunch -- classic sandwiches with fresh avocado, turkey, chicken, and comforting tomato soup.

And we were happy to find out from the owner that they weren't closing -- just moving!

And oh yes, pie, of course, pie. We shared a slice of blueberry (sorry no photo, it was eaten too quickly). 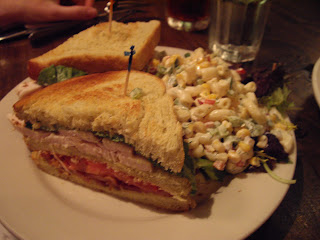 Posted by fougoo at 8:36 PM No comments: