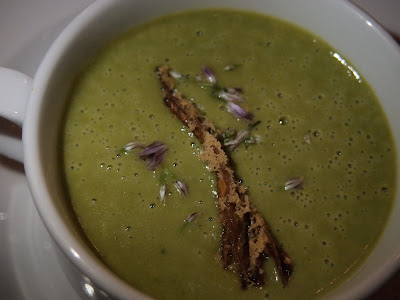 Because of the recent series of Top Chef Masters, I was looking forward to dinner at chef Naomi Pomeroy's Beast in Portland. The restaurant is set up to serve customers all together in two seatings, and the menu is a set six course prix fixe with no substitutions. Despite being called Beast, the dinner we had was veggie heavy, and I was disappointed that we did not get to have pork for our main course. I've also included the wine pairings.
We started with a chilled cream of spinach soup with a fried artichoke. The soup was really good, capturing the taste of spring.
Schloss Gobelsburg Gruner Veltliner Steinsetz 2009 (Austria) 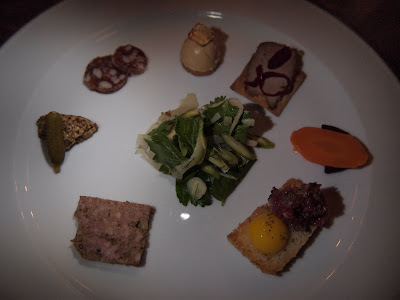 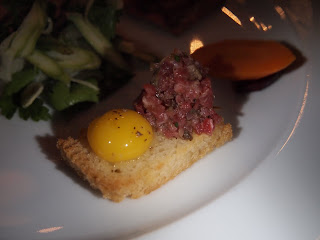 The second course was a charcuterie plate. It included five items: Olympic Provisons' salami, pork pate with fennel & chili flake, chicken liver mousse on leaf lard cracker, steak tartare with quail egg & toast, and a foie-gras bon-bon topped with sauternes gelee.
The chicken liver was awesome, particularly with the cracker. I also enjoyed the tartare. The foie-gras bon-bon got mixed reviews in my party, but I like a sweet foie sometimes.
O.S. Winer Riesling Champoux Vineyard 2010 (WA) 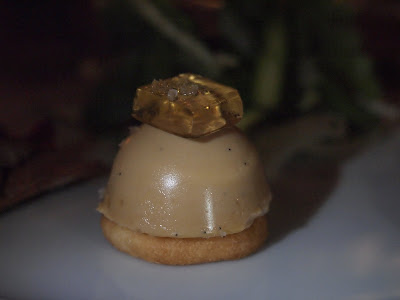 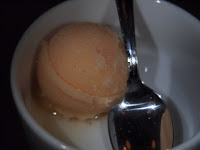 We followed with a small palate cleanser, a citrus rhubarb thyme sorbet. It was a little sour and tart mixed with sweet. 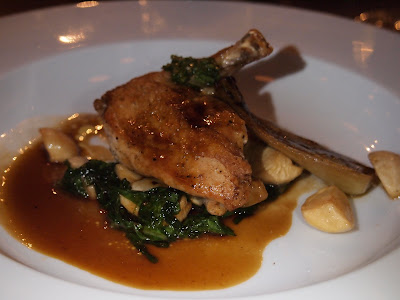 Our main was originally listed as duck, but instead we had a Rainshadow El Rancho game hen served with caramelized turnips, lovage, white wine braised fennel, and demi-glace. I found the hen a bit disappointing as it was dry especially with my anticipation for a fatty duck. The veggies were excellent though.
Benoit Courault Anjou Rouge Tabeneaux 2008 (France) 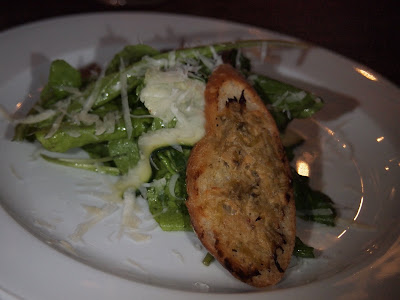 The fourth course was a salad of arugula, shaved zucchini, and lemon oil with sheep's ricotta and a green garlic toast. The rose wine that was paired with this was really sour, and while it went well with the salad, it was not pleasant to drink on it's own.
Chateau Mourges du Gres Fleur D'Eglantine 2009 (France) 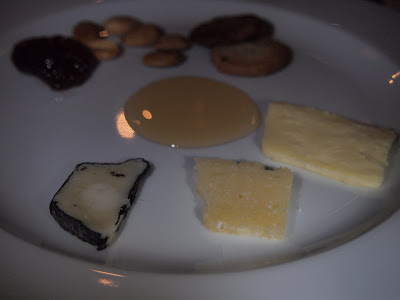 The next course was a cheese plate. We had three cheeses: a Washington state ladysmith cow's milk, a French cow's milk cheese, and a goat's milk cheese. Sorry, I can't read my handwriting in my notes.
They arrived with a yummy anise & fleur de sel shortbread, honey, Angelico plums, and fried Marcona almonds.
Domaine Richou Anjou Blance Chauvigne 2009 (France) 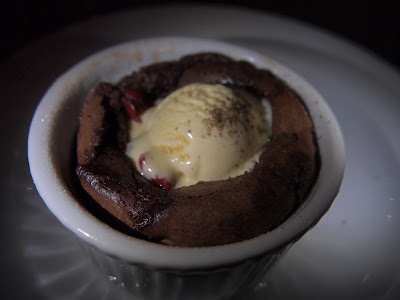 Dessert was a chocolate souffle topped with a smoked salt ice cream with balsamic macerated strawberries.
All in all it was just an ok meal, definitely the least memorable of my trip.
Clos Serre Romani Maury NV Roussilon (France)

Overall I felt that Top Chef Masters was disappointing so I wasn't surprised by this review. I just felt that there wasn't a lot of innovation or surprises in the food.