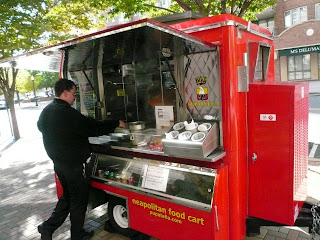 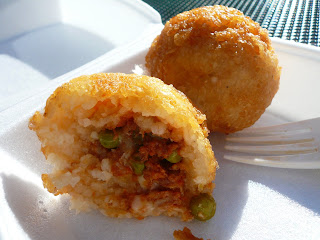 This week, before the Bourdain talk, since I had part of my day off, I grabbed lunch at the Pupatella Neapolitan food cart located outside the Ballston Metro station in Arlington, VA. I had heard about them through Don Rockwell and had been planning to try it out for some time.
I started with the stuffed rice balls- they are stuffed with faux beef, veggies and smoked mozarella and then deep fried. Very tasty. 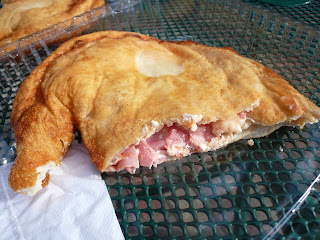 I followed it with a deep fried calzone- this is they way they make it in Naples- not baked. It was filled with ham, ricotta, mozarella, and tomato sauce. I think I would actually prefer calzones if they were deep fried like this all the time.
For dessert, I had a Nutella pizza topped with pears- also delicious. 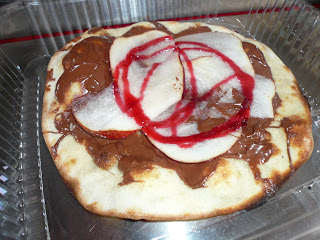 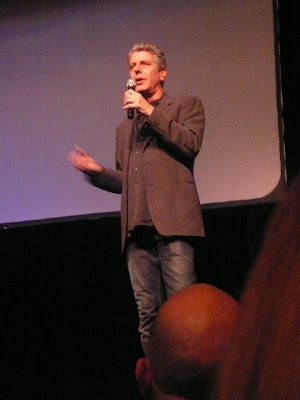 So last night, Anthony Bourdain, the inspiration for our food blog, gave a talk at Lisner Auditorium in DC. He's out promoting a new book, No Reservations: Around the World on an Empty Stomach a compilation of pictures and notes from his Travel Channel program of the same name.
His talk was funny, crass, and opinionated- all I come to expect of the man. He showed a few clips from his show: the one when he goes with his office manager to make Kim Chee, when he goes to Brazil to eat and drink all day at a lady's home, and the segment with the bamboo pole noodle maker in Hong Kong. 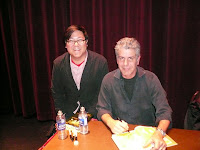 A few interesting points- he's quit smoking! Probably because he's just had a daughter. He noted his wife, from northern Italy, imports Italian baby food with flavors like prosciutto and parmesan.

He said the most disgusting dish he ever had was in Iceland- it was a shark fermented in it's own urine, then fermented again in lactic acid for a few months. This was worse than the uncleaned warthog intestine he had in Africa.
He said the best pork he had was in Bali. Puerto Rico was in second place
He said he has not yet crossed the food line of dogs and cats, and wasn't sure if he could take that step.
When asked where he would stop and stay forever, he mentioned his love for Vietnam and it's food and lifestyle.
He confirmed that he had Ben's Chili Bowl the night before and loved it.

He did not hesitate to deride vegetarians, the Food Channel, and Rachael Ray.
If asked who he would battle on Iron Chef. he said, "Who's Cat Cora? She has a SAG card. What chef has a SAG card?" He figured they would give him something he hated like Tofu or Veggie burgers as the challenge.
He mentioned that Hung was indeed hands down the best one on Top Chef this season. He expressed a fondness for Nigella Lawson after she described to him a night in Spain where they aborted a pig and roasted the fetus for her to eat.

He said his favorite food movie moment was the revelatory scene in Ratatouille. He also liked Eat Drink Man Woman.
His dream meal is the sushi by Masa Takayama, his fav Ramones song: "Beat on a Brat". He confessed to liking KFC's mac & cheese.

Towards to end of the talk, he discouraged an audience member who wanted to change his career and become a chef. He said it was for the young- too much humiliation and too little reward. He recalled his days in the kitchen watching the spirit of aspiring culinary school grads die. He said that the reason Mexicans are good in the kitchen is that they expect life to suck, so the hardship of the restaurant business is not so bad.
Posted by 1000yregg at 7:32 AM 1 comment: 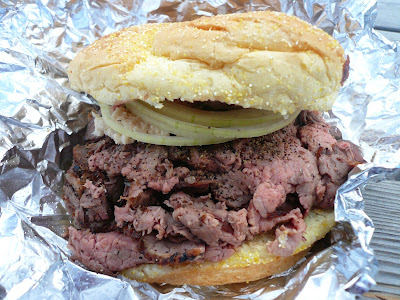 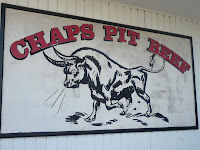 The options for the beef are medium and medium well- I got a medium on a nice sized kaiser roll. I added some horseradish and onion. It was a nice sandwich- good sized, nice flavor.
In the end, I still prefer Canopy because you can get the meat cooked rare- nothing like a pink bloody bun, but since Canopy is in Ellicott City, I would agree Chaps is Baltimore's best. 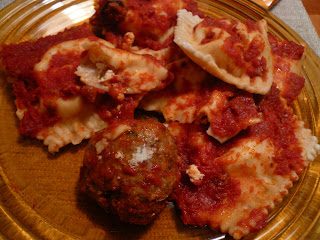 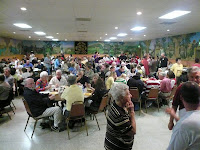 After reading an article in the Sun paper, Bigfatlar, kwan and I went to the St. Leo Roman Catholic Church biannual benefit dinner in Baltimore's Little Italy for a meal of homemade meatballs and ravioli. While not quite worth the 2 hour wait, the slightly spicy apricot sized meatballs were delicious as was the tangy sauce. I was a little mixed about the homemade ravioli- some of the edges were a little tough.
Posted by 1000yregg at 7:27 AM No comments: