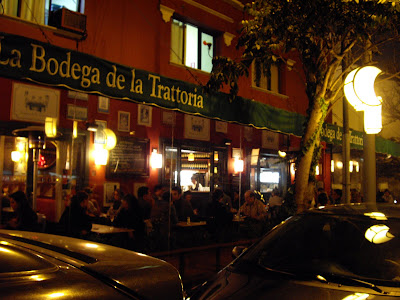 We decided instead of having dessert at Huaca Pucllana, we'd walk across the street and get coffee and a sweet at La Bodega de la Trattoria. Apparently this is the more casual outpost of a restaurant La Trattoria that is owned by a popular Peruvian TV cooking star. The coffee was excellent, and we share a Cinco Leches cake -- in addition to the milk, condensed milk, and evaporated milk of the traditional Tres Leches, this version added coconut milk and dulce de leche. 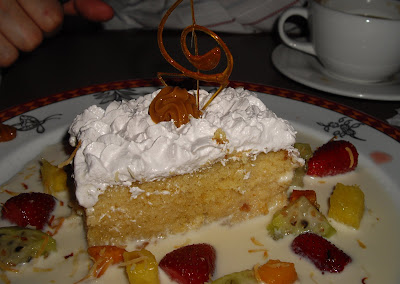 Posted by fougoo at 7:40 PM No comments: 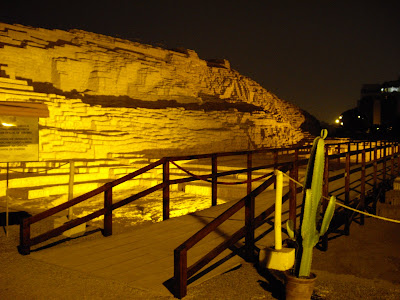 I can't remember where I read about this place, but it sounded so amazing, we had to go. Set next to pre-Incan ruins right in the middle of Lima, Huaca Pucllana is truly an experience. You walk up a cobbled walk to a colonial mansion next to the ruins, and if you're lucky enough to be seated ont he veranda, you are literally in the setting pictured above. We didn't have a reservation, but the hostess and wait staff were very cordial and accomodating. We sat in a comfortable bar area eating corn nuts and perusing the menu until a table freed up outside. 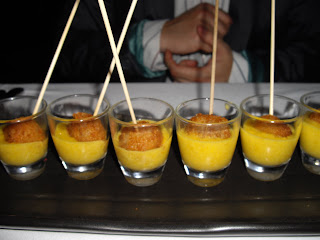 For his starter, Redneckhunter chose the crab croquettes served in a shot of corn cream. He was hoping for a crab version of the ham croquettes from Amada that just burst in your mouth, little balls of delicious juiciness -- but these sadly weren't as good. Fun presentation though. 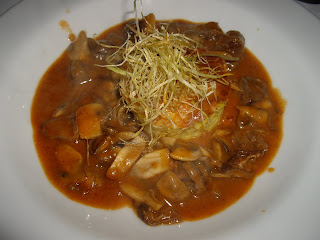 My appetizer was much better -- a corn cake topped with beef and mushroom ragout. The corn cake was smooth and creamy.

For our entrees we both chose from the section of the menu of reinterpretations of traditional Peruvian Creole cuisine. Unfortunately, I accidentally deleted the photo of Redneckhunter's entree, which was Breaded and pounded tenderloin served with refried black beans and rice, fried bananas and sunny side-up egg. As he put it, like country-fried steak Peruvian-style. 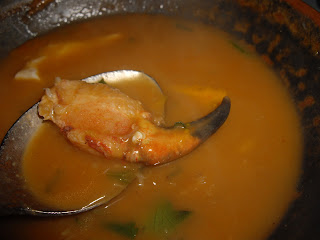 I got the Creole Style Chupe, typical Peruvian crab chowder, served with corn, lima beans, cheese and topped with a fried egg. The broth was wondefully flavorful. It reminded me of a high-end version of the Costa Rican sopa marinera at our place in Trenton.

After dinner, we walked a little bit around the perimeter of the ruins taking pictures. The site was closed as a tourist site, but we got to see a little bit. It would have been nice to see it during the day, but I was glad to have gone at night and been able to have the full spectacular dining experience.

Posted by fougoo at 6:25 PM No comments: 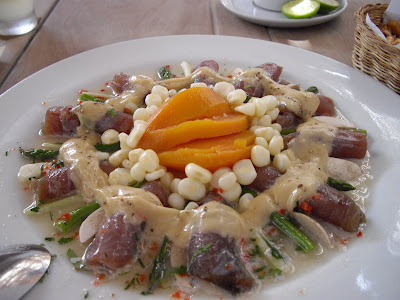 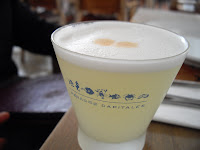 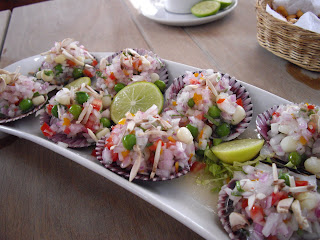 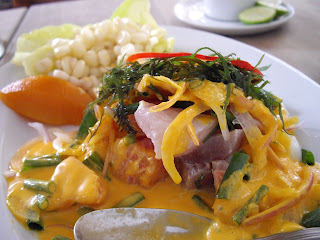 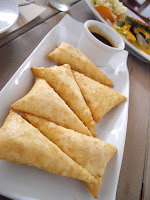 After the party's over... 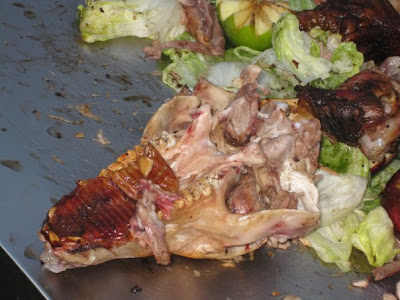 I just had to share this awesome photo from Debbie of the carnage from our wedding...

And a shout-out and thank you to the pig master himself -- Wes Moon of Party King Caterers! It was amazing! 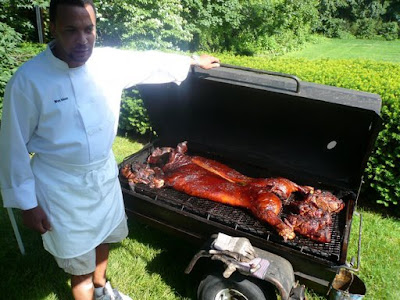 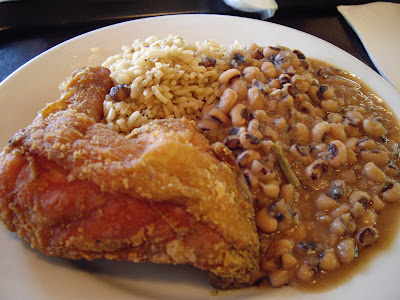 Redneckhunter and I were flying out from JFK for our honeymoon, so we got up to Queens early to avoid NYC rush hour traffic. So with some time to kill we decided to start our trip with a mini food safari (after all parts of Brooklyn and Queens almost feel like foreign countries - all the Cyrillic seen in Brighton Beach, Indian in Jackson Heights - hell, Edison, NJ is a foreign country!)

So a quick chowhound search brought up a thread: Where to grab a bite within 15 minutes of JFK airport. We were able to hit 2 of the spots mentioned: fried chicken and black eyed peas at Saratoga Country Kitchen on Atlantic Avenue; and curry chicken with chickpeas and potatoes with the biggest roti I've ever seen at Annie's Roti Shop on Rockaway Boulevard. I wanted to try Fish and Wings (also on Atlantic Ave.), but we couldn't fit in the food we had gotten as it was. I had to bring my curry and roti and eat it at the airport! 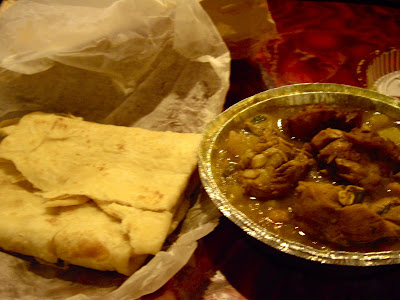 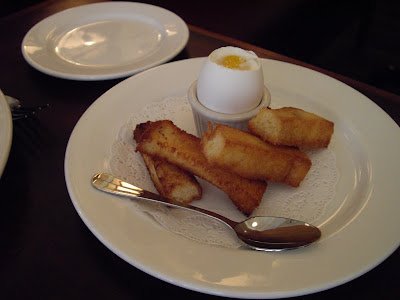 For brunch after our girls night, me and the last 2 ladies standing went to Parc, Stephen Starr's new French bistro in the old Bleu location on Rittenhouse Square. It's a great replica - right down to the woven chairs on the sidewalk and the Edith Piaf on the sound system.

We got Eggs en Cocotte to share - crisp buttery toast fingers to dip into a runny egg. The toast was super buttery - reminded me of "dong dong dan" that my dad used to make (translated from Chinese "hole hole egg") - egg fried with the hole cut in the toast for the sunnyside yolk - so yummy... 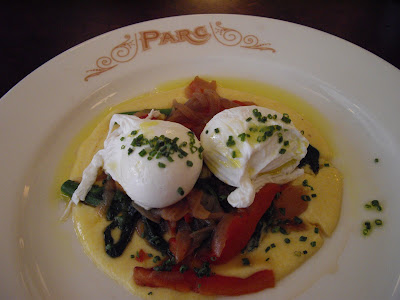 Then still in my soft egg and polenta mode from dinner the night before, I ordered it again for breakfast -- 2 poached eggs, with rapini and red peppers on top of creamy polenta. 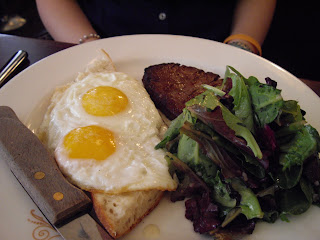 My friend got steak and eggs -- a petite filet with 2 sunny side up eggs, mornay sauce, and a side salad. My other friend got pancakes with blueberry compote and maple syrup. 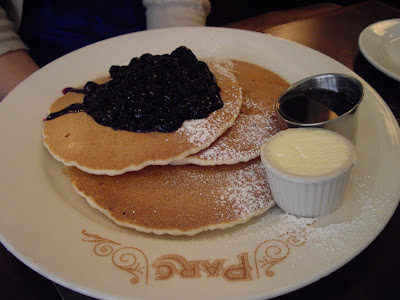 Posted by fougoo at 8:59 PM No comments: 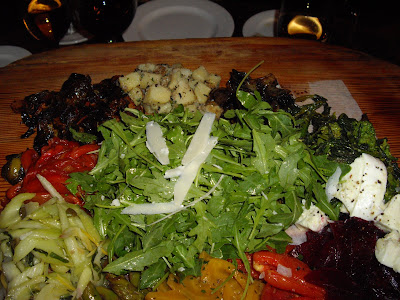 More recap of the past couple months... the girls took me to a couple of great places during my bachelorette weekend. Dinner Saturday night was at Osteria, Marc Vetri's second restaurant in Philadelphia. 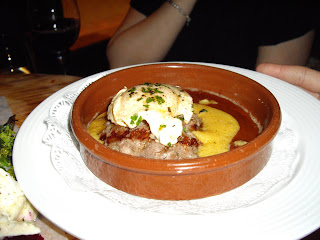 We started out with the antipasto, served on a huge wooden plank in the middle of the table. Kim and I were in the same mindset of craving soft-cooked egg, so we also got the "ciareghi" house made cotechino sausage with polenta and sunny-side up egg. 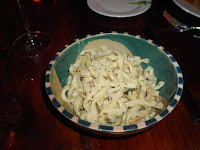 I got the gemelli with sweetbreads, asparagus and parmigiano. The other girls also got other delicious looking pasta dishes.

For dessert, we ordered the chocolate flan with pistachio gelato. It was really more like a molten chocolate cake than flan... but that's just semantics. 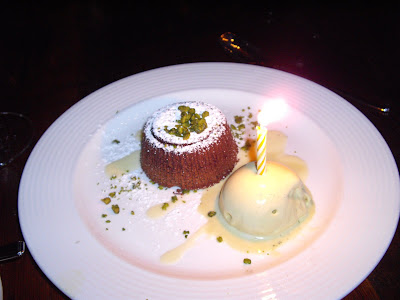 Posted by fougoo at 8:30 PM No comments: 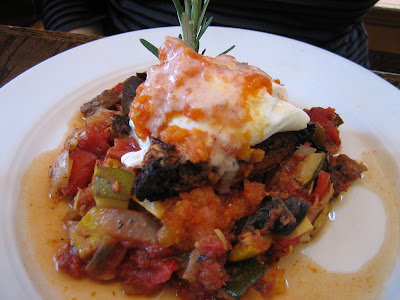 Sorry for the lack of posts as of late... but we'll try to make up for the spring. On our last girls shopping day, petiteseour and I ate at Le Grainne Cafe in Chelsea. She's a big fan of the Oeuf Mason, a poached egg on a goat cheese potato cake with ratatouille. It's the perfect comfort food -- all the rich flavors melding together. I had a savory crepe with merguez sausage and red peppers. The coffee is also excellent, and that day we had not one, but two, celeb sightings... 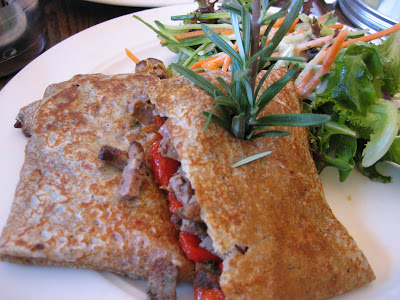 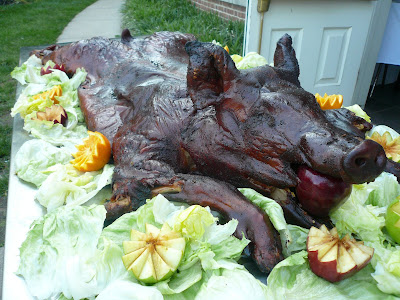 Sorry all for the lack of updates. Fougoo just got married. Congrats to her and Redneckhunter.
For dinner, they got a whole roasted pig. I ate a whole foot and some cheek meat. Yum.
Posted by 1000yregg at 3:39 PM 4 comments: