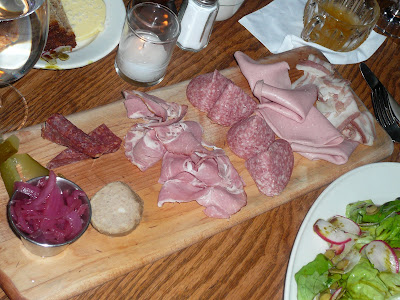 On a blustery December night, I found myself chauffeuring 1000yregg over to Prime Meats, the heralded meatery at the end of Carroll Gardens. In a relatively short time, this restaurant has become a symbol of Brooklyn's fooderati: locally sourced, decadently butchered, and accepting no reservations. But would we be so impressed? 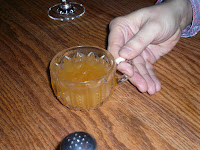 We were lucky to duck into a communal booth, because the railroaded room and stool-less bar gets busy early. Deciding to be a big eater but cheap drinker, I tried the house punch (described as 'punch' on the menu), a citrus concoction steeped in bitters and served in a punch glass. We prepared ourselves for the 'authentic' German meat house experience, along with the dollops of mustache wax gleaming from the bartenders. We started with a tablet of charcuterie, house-cured salamis, bologne, with touches of mustard. 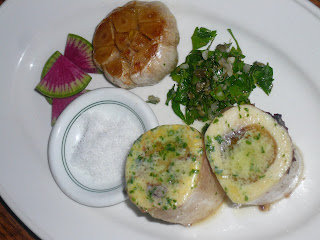 Next was the big test, an order of bone marrow with a garlic relish and toast. It was truly delightful, and sinfully salted. 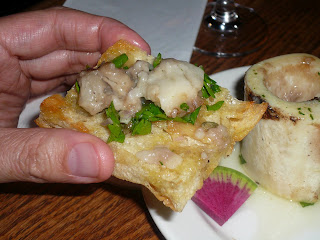 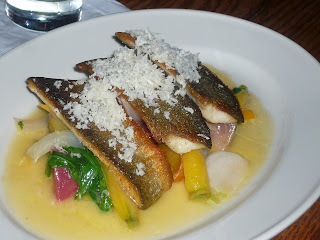 1000yregg plunged into house made sausage plate with sauerkraut- it had weiss wurst, knockwurst, a piece of tongue and a block of pork belly. I took a left-turn instead; I went for the fish. Any good restaurant worth it's salt should be able to dish out everything to the highest elevation, and this trout with horseradish did not disappoint. In fact, it made room for another glass of delicious punch from our hirsute barkeeps. 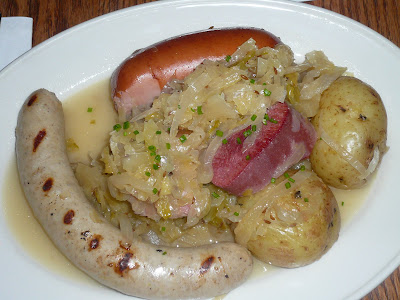 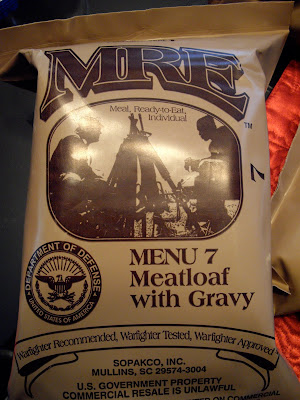 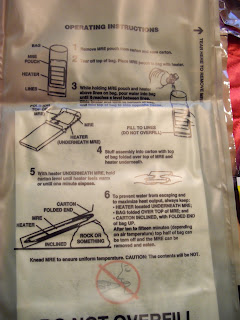 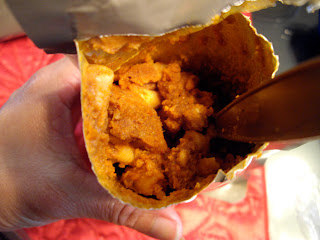 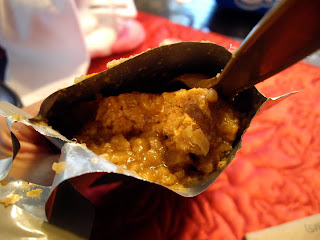 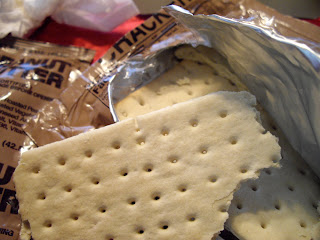 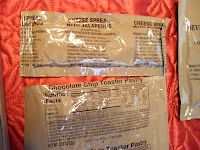 The highly coveted (according to Redneckhunter's brother) cheese spread and peanut butter packets were perfect to go with the crackers aka hard tack. I also got a kick out of knowing that the recipe for those crackers basically haven't changed since the Civil War.
Posted by fougoo at 4:14 PM 4 comments: 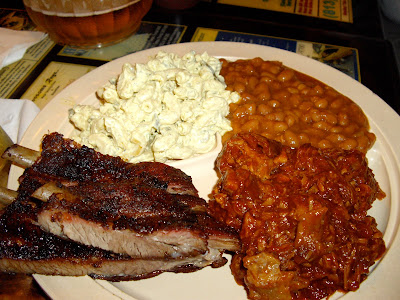 We spent the holidays with Redneckhunter's family in Tampa. Following a christening, the whole family went out to eat at Kojak's in Tampa. Northeasterners as we were, we couldn't believe the prices for the portions. Redneckhunter got a barbecue combo plate - ribs, pulled pork, and 2 sides for $11.50. I got a rib sandwich - 2 ribs on white bread with a side dish for $5.75! The most expensive thing on the menu was $24.95 (which would be what a 1-person rib dinner would cost in our area) for a full slab of ribs plus a pitcher of beer! The ribs were moist, and were even better with the house barbecue sauces - one mild, one hot. Both were good, but I liked the spicy one. 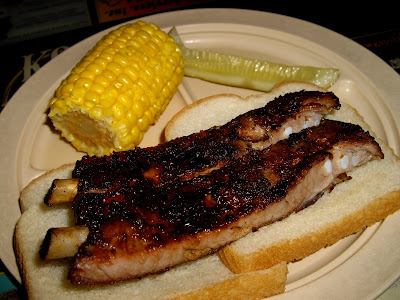 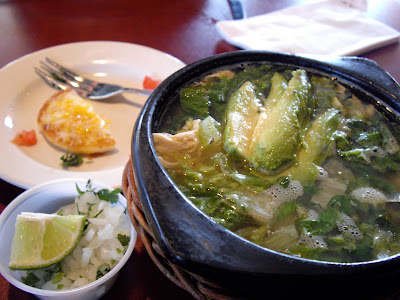 My hometown of Newark, DE is not a great spot for food (notwithstanding Capriotti's subs for which I get cravings from time to time), but every once in a while a place surprises me. Like the Santa Fe Mexican Grill on Main Street. I think the place mostly caters to heavy margarita drinking by college students, but the food is actually not bad.

At a stop in for lunch around Christmas time, I got a nice bowl of posole with chicken, with an arepa on the side (very small compared to what I'm used to in NYC, but nice and buttery). And Redneckhunter got a good plate of tacos, rice and beans. 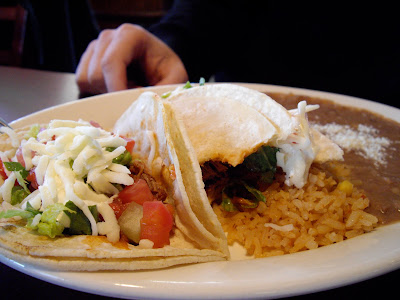 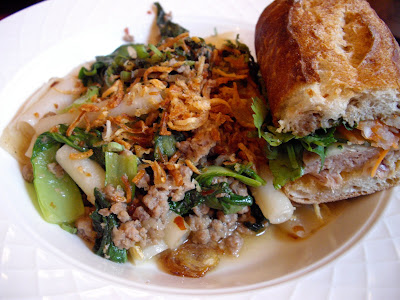 Ma Peche is the newest soon-to-be-open addition to the Momofuku empire, their first foray into Midtown. Prior to its officially opening in the Chambers Hotel on 56th Street, they started serving a limited lunch menu in the hotel mezzanine lounge. So on our last "pretending to be ladies who lunch" day, petiteseour, another friend, and I decided to check it out and take advantage of the $10 lunch specials before the real restaurant prices hit.

The space was lovely, albeit without real tables and chairs. And by 12:20, the place was already full. After a short wait, we ended up on a loveseat and ottoman eating off of wooden box-cocktail tables.

Being all slightly under the weather, we had to rethink our usual practice of sharing all of our food. We all wanted to try the Hue-style chicken soup, but didn't think we could each eat an entire bowl. The waiter gave us a bit of a hard time about this, but after we explained that we were each going to order a lunch special on top of this, he acquiesced. 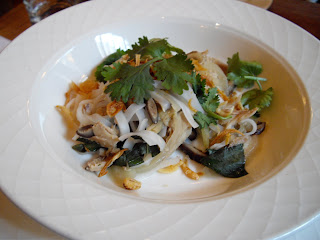 This was just the start of an all-around difficult service situation. When the soup did arrive, it came in one bowl (the ingredients in one bowl -pictured left, with broth to be poured on top). We had to re-explain why we couldn't all eat from the same bowl, then had to wait for them to come back with smaller bowls, all while our soup sat and cooled. Then there was also the bottle of water that was never delivered to petiteseour, and other general inattentiveness and forgetfulness.

For our main lunch specials, we tried the rice noodles with pork ragout, greens, and crispy shallots, and the terrine banh mi (both pictured above). The banh mi was terrific - the terrine was flavorful, the bread crusty, and the pickles fresh.

The final nail in the coffin on the service was ordering coffee at the end. They served French press coffee for $7. Faced with the decision of getting $7 coffee or going out in the cold to go somewhere else, we figured, well, we'll split a pot between us. Even though we asked for 1 pot of French press, they came back with 1 double press, and 1 single press. It was more coffee than we could drink, and we were charged $21. The way we saw it, our waiter could have explained the sizes, and suggested that maybe a pot for 2 could be split by the 3 of us.

So hopefully they'll figure out the service in the official restaurant. Our waiter was only saved from being stiffed too badly on tip due to his being quite cute, our friend's sympathy having worked as a waitress herself, our having sat and chatted at lunch for over 2 1/2 hours, and not wanting to be perceived as typically thoughtless "ladies who lunch." We all agreed it ended up being a pleasant lunch, a nice spot for our little girls reunion, but if we had all be coming from jobs to meet up for a Midtown lunch, we would have really gotten pissed. 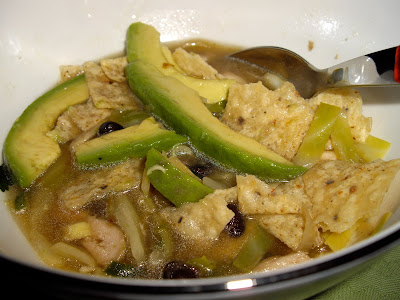 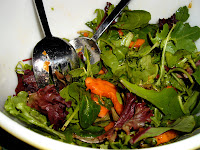 With a few members moving out of town, and new babies, it's been hard getting the girls together for cooking, but we managed to do it last month. No real theme was set, but with winter finally here, it ended up being a good night for cold weather comfort food.

I made Kenny Shopsin's chicken, tortilla and avocado soup from his "Eat Me" book. Brownie made a papaya, avocado, and mache salad; Melissa made David Chang's brussel sprouts with mint and spicy toasted Rice Krispies. 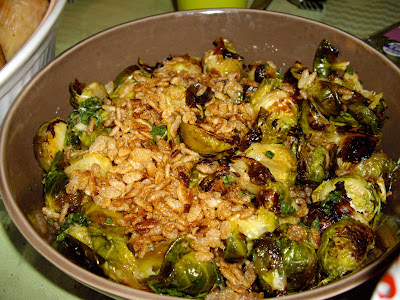 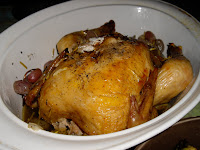 Debbie and Marian supplied the hearty main dishes: a whole roast chicken by Deb, and traditional Italian Sunday gravy by Marian -- super rich sauce slow-cooked all day long with homemade meatballs, sausage, and baby back ribs falling off the bone -- guy food as she put it. 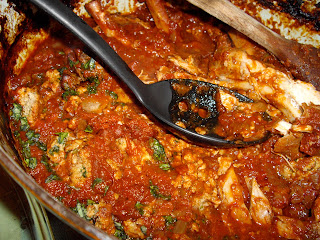 Posted by fougoo at 3:10 PM No comments: 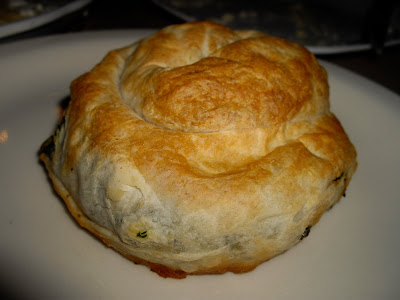 Gallup and I wanted to find a place to eat close to Penn Station, and my friend, a frequent North Jersey-to-NYC train traveler, had told me about Djerdan Burek (which she'd read about in Time Out NY Cheap Eats). I had to text her immediately to thank her for the tip! With the prices as low as they were, we thought everything we ordered would only be about 1/2 or 1/4 as big as they actually were! We ordered way too much food...

We got a spinach burek roll, a slice of the meat burek pie, an an order of fried dumplings to start. That would have seriously been enough for dinner... The meat pie was my favorite - the crust was super flaky! 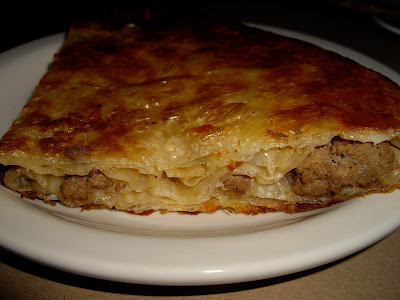 Luckily we were wise enough to decide to share an entree - which was Stuffed Beef Patty - Pljeskavica, a beef patty stuffed with Bulgarian cheese and thin slices of smoked beef served on a pita.
The beef patty was enormous - the roll and patty were the size of a dinner plate. The smoked meat was an excellent flavor addition to the ground beef, and the paprika-laden sauce was delicious. 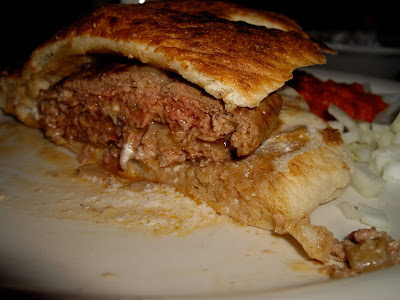 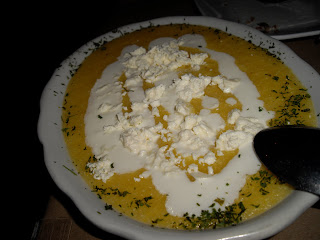 Both of us also wanted to try a side of the polenta with yogurt and Bulgarian cheese, again, a huge portion. This was excellent - more like cream of wheat or grits, I'd say, and really wonderful with the yogurt and cheese.

If I hadn't stopped him, Gallup would have wanted to try dessert - all of which sounded amazing. There was one which was a whole baked apple stuffed with chocolate, walnuts, and cream, which I'll have to try next time.

We only finished about 1/2 of everything, so luckily Redneckhunter got to taste everything from the doggie bag we brought home!

I attended this excellent workshop earlier in the fall, and was kicking myself that I forgot my camera and wasn't able to blog it. Well, turns out there's a video of the delicious strudel-making in action. If you live in the Princeton area, I highly recommend it:

Posted by fougoo at 1:33 PM No comments: