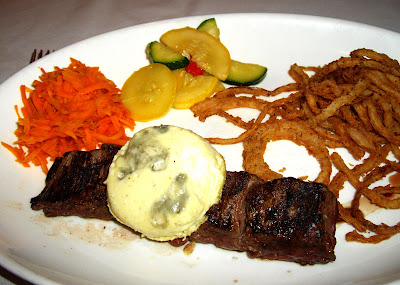 Bern's Steakhouse apparently is THE place to go in Tampa.  Founded in 1956 by Bern Laxer, it has become world renowned for its extensive wine cellar.  They're also known for their aged steaks and dessert room - basically it's a dining experience, and it did not disappoint.  Starting with the wine, Bern was an avid world traveler and amassed quite a collection -- if I'm remembering correctly, Bern's cellar is the largest in the Americas and 2nd largest in the world.  According to their website, " more than 6,800 unique wine labels, 5,500 red wines, 1,000 white wines and more than 200 sparkling wines. In addition, we feature about 300 Madeiras, Ports and Sherries by the glass, as well as 200 table wines served by the glass with vintages to 1973." 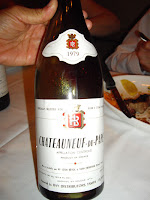 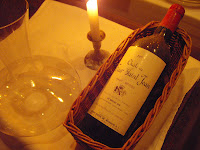 Redneckhunter was a like a kid in a candy shop looking through the wine list, aka Bible, which was about as thick as a telephone book.  He was even texting his wine stores friends who were green with envy. We started out with a 1979 Chateau Tour Saint Jean Bordeaux, bottle covered in dust, and sediment decanted out.  Redneckhunter thought it was a bit past its prime, and the waiter was very accommodating offering to get us something else, but we let it breathe a bit and drank it anyway.  I think he was much happier with our second bottle - sticking with 1979, this was a Chateau Neuf de Pape.  Both bottles were unbelievably reasonable price-wise. 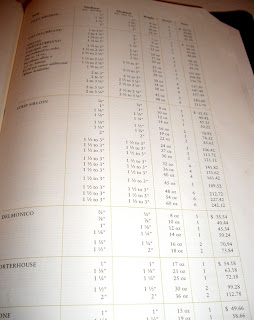 Now onto the food:

While not as thick as the wine list, the Bern's menu is quite encyclopedic in its own right at 19 pages long.  In addition to pages on the history and ethos of the restaurant, and the usual sections devoted to starters, seafood, etc. there's also a 2-page caviar list, and a 4-page explanation of cuts and doneness of steak, including a full-page chart of cuts and thicknesses from which to order.  Then there are sauces or toppings that can be added.

It was all a little overwhelming for me (not being a regular steak eater), so I opted to just get 6 ounce Chateaubriand tips, medium rare.  I was however intrigued by the idea of "flan" as a topping, so I tried a blue cheese flan on mine. 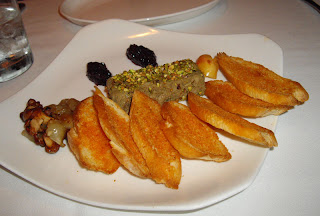 At Bern's (unlike the venerable Northeast steakhouses we're used to where everything is a la carte), steaks come with soup (French onion), salad (I tried the house dressing vanilla macadamia), baked potato with all the fixings, onion rings, and vegetables.  So with all that food in our future, we opted to just share 2 foie gras appetizers among our party of 6 people.

We ordered one of the daily specials -- foie gras torchon, encrusted with pistachios, cranberry compote and caramelized onions, and one of the foie gras dishes off the menu -- foie gras a la plancha with truffle roasted wild mushrooms, on a toasted brioche, and Napa Valley Merlot reduction. 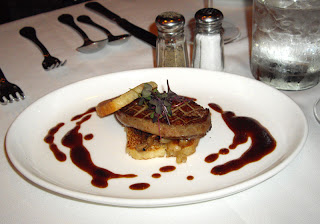 The torchon was smooth and the flavors of the fruit and onions really blended nicely.  The grilled foie was also delicious and on this dish it was the reduction that really hit the spot.  I was sopping it up with bits of toast.  I could have been happy drizzling it on ice cream.

My steak (pictured above) was perfectly cooked, with that nice aged flavor, and the flan was delicious.  Redneckhunter's rare was sufficiently bloody for him.  I have to say I had little room left in my stomach to really eat the baked potato, carrots sauteed in Grand Marnier, and veggies. 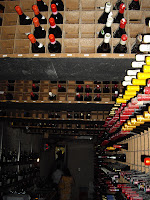 Plus, I knew I had to leave room for dessert in their separate dessert room.  Luckily we had a little kitchen and wine cellar tour to give us some time to digest.  Pictures can't do justice to how big the cellar was - room after cavernous room.  And apparently what we walked through was only about 1/10th of the full collection.

Finally we were escorted on to the Harry Waugh dessert room, named so after a friend of the Laxers. Harry was a British gourmand and wine connoisseur, director of Chateau LaTour.  After a memorable evening where the Laxers were invited to enjoy aperitifs and desserts in Waughs drawing room, Bern Laxer, thought, why don't we do that in the US?  And thus was born the Bern's dessert room.  Each table is seated in a private booth made from old wine casks, with its own music selection, in which to intimately enjoy dessert, coffee, and drinks. 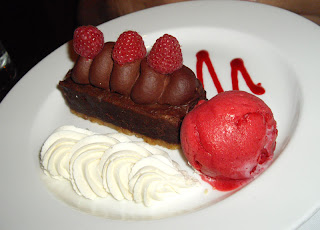 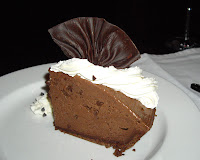 I ordered Bern's version of "Cafe Con Leche" (you know, when in Florida...).  I'd say it wasn't authentically Cuban, but that was probably good thing as it was not too sweet for me.

Above is the Macadamia Nut Sundae -- of course it was yummy, but I have to say I was hoping for more macadamia flavor in the ice cream.

Far more nut flavor was delivered in the crust of the Framboise Macadamia Decadence, with raspberry sorbet.

Then there was the Chocolate Cheese Pie - not exactly a cheesecake, this pie was like a dense mousse, and very pretty.

I realize I never got a picture of the King Midas - carrot cake with Macadamia Nut Ice Cream and dark chocolate sauce, but it was probably the least favorite one of mine.  The most favorite (how can you go wrong really) was the Dulce de Leche Liquid Center Cake. 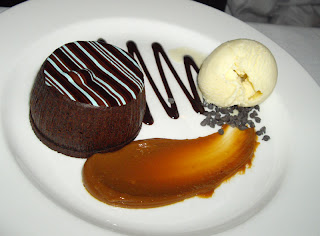 Four hours later, we were pretty fat and happy.  Bern's is definitely an all around dining experience, and shouldn't be missed if you find yourself in Tampa. 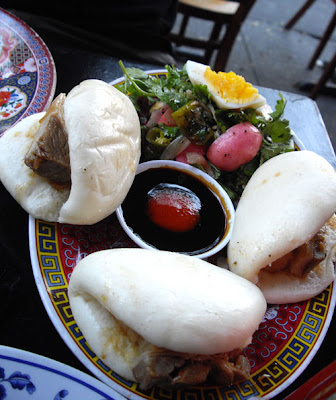 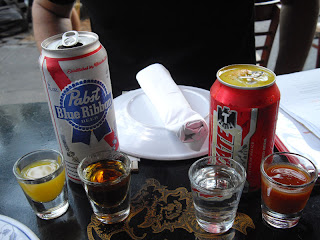 Recently we found ourselves going out in the Meatpacking District, and since I'm rarely in that neighborhood, I wanted to go eat at Fatty Crab.  It was a great summer day, so we sat outside, and Redneckhunter and our friend started off the evening right with some Fatty special shots and chasers:  #1 was the Recession Special: whiskey, spicy pickle back, and PBR; #2 was the Panchito Special: tequila, Malay sangrita, and Tecate with lime and chili-salt. 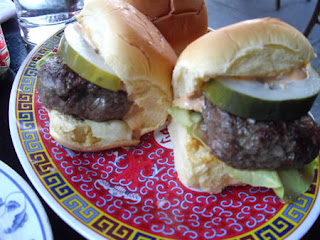 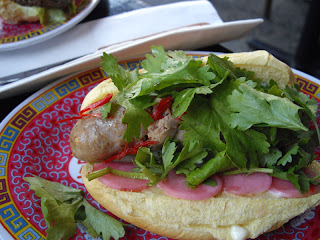 Then came the snacks:  Steamed pork buns (which were good, but less flavorful than Momofuku's), Fatty sliders (pork and beef burgers, with a nice thick Asian-style pickle, and spicy remoulade), the Fatty dog (xo sausage, pickled chili, pickled radish, cucumber, aioli), and charred corn with chili-sugar-salt (a bit overpriced at $6).  We also ordered my favorite dish, Nasi Lemak (chicken curry, coconut rice, poached egg, and otak which is dried spiced fish). We devoured it before I thought of taking a photo.   It's still my favorite dish - just wonderful comfort food -- and of the snacks, the nice surprise were the yummy sliders.  Another shot and chaser and we were ready for the Meatpacking circus! 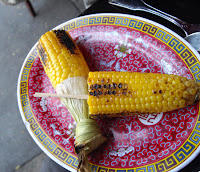 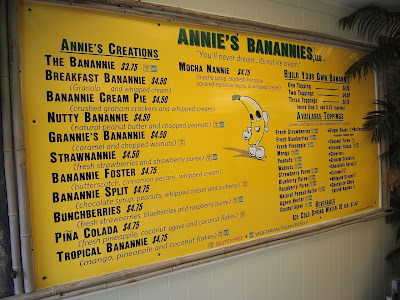 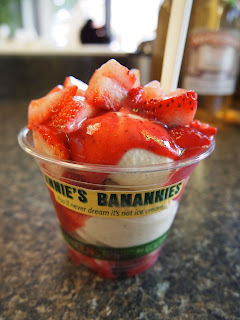 I have always loved frozen bananas (they don't even have to be dipped in chocolate), and have often put peeled bananas in my freezer to have as chilly treats. But I first discovered that putting frozen bananas through an extruder created something akin to ice cream years ago at a place in Manayunk, PA. That place is long gone, but I've been lucky to have The Bent Spoon close to home in Princeton, with their banana whip, and I was so happy to discover Annie's Banannies in Rehoboth Beach!

Annie's story, according to their website, is that she was inspired by her mom. Growing up, her mom loved juicing, the kids hated it, until they discovered frozen bananas through the juicer. Annie made a promise to her mom, as she was dying of cancer, that she would open up her business Annie's Banannies, making frozen banana "ice cream." And she did it, opening in 2009, in Rehoboth Beach where they used to vacation as a family.

At Annie's you can have all sorts of healthy toppings added -- we went with strawberries and strawberry puree for 1000yregg, and natural peanut butter for me. As good as ice cream any day! For Baltimoreans, she's got another branch at Harborplace. 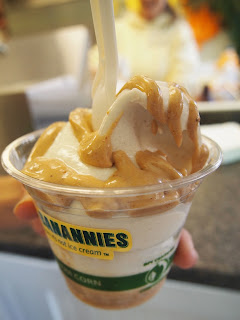