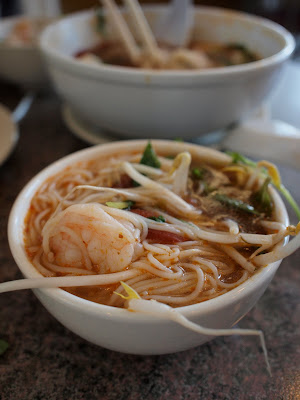 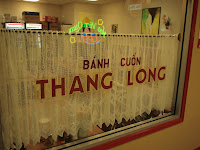 My friend, Mike, and I went on a mini food safari for lunch at the Eden Center, a giant Vietnamese shopping center located at the Seven Corners in Falls Church, VA.
We started at Bánh Cuốn Thang Long, and ordered their #1, which was the name of the restaurant. Bánh cuốn is a dish consisting of thin sheets of rice flour, in this dish, filled with either pork, crushed shrimp, or fried onions.
It came with bean sprouts, crispy shrimp cakes, and sliced of pork "bologna". We dipped everything in fish sauce mixed with chilis. 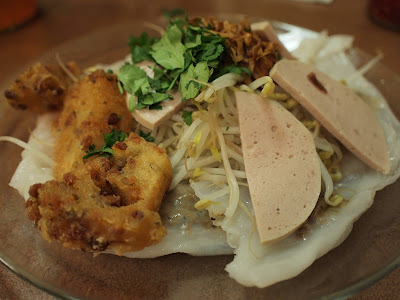 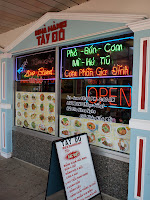 Our second stop was a restaurant called Tay Do which had at one end a stage set up for a band to play.
At this restaurant, we noticed that most of the Vietnamese places in Eden Center have ubiquitous mason jars of fish sauce to go with meals. 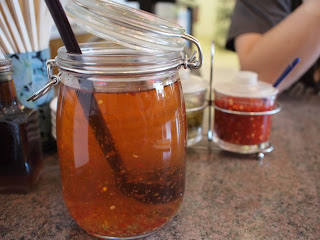 Here, I ordered a drink called Nuoc mia, made of sugarcane juice. It was not too sweet as I imagined, and it had a nice hint of lime flavor to it. 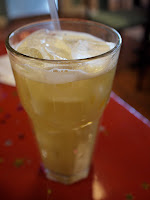 For our entree, we ordered the Bún Cha Hanoi, which consisted of vermicelli rice noodles that came with a bowl of grilled pork, pork meatballs, & shrimp and a large pile of veggies including bean sprouts, pickled cabbage & carrots, basil, and cilantro. 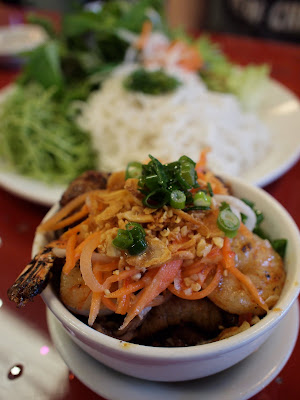 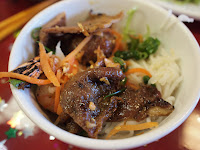 To put the dish together, you place the noodles and veggies in a bowl, and then pour the meat items along with the sauce on top. Certainly adding extra fish sauce is good as well.
This was a really nice version of Bún I had never had before. Normally, I was used to the Bún dish with the fried eggrolls and pork, but this had a really nice sauce that was used to cook the meat and shrimp. 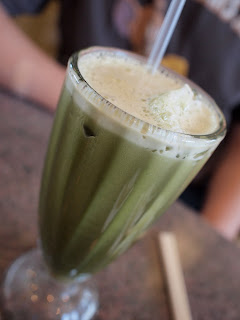 Our third stop was Bánh Cuốn Saigon. Mike tried the pennywort drink which had a flavor reminiscent of wheat grass, but at least it was sweetened.
Our dish here was the Bún riêu cua (top). It was like pho, but the soup broth was made with shrimp and tomato. It came with the usual side vegetables: bean sprouts, basil, cilantro, and chili peppers.
All together, the ingredients tasted delicious. 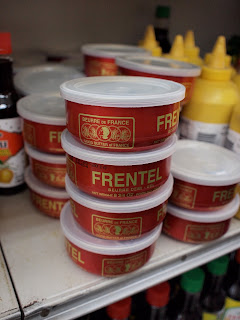 After lunch, I went to Saigon Mart, a grocery in Eden Center and picked up a few tins of Frentel for Fougoo. It's a French butter that was popular in Vietnam thanks to colonial occupation. It comes in tins and is mainly used as a spread.

what a great feast!