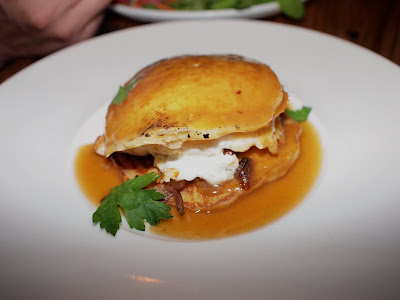 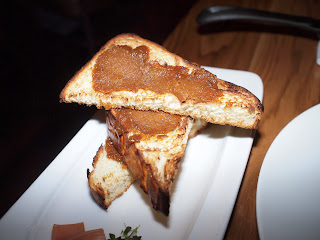 A great new restaurant opened up only a few blocks from where I live in Baltimore, The BlueGrass Tavern. The food is New American with a good emphasis on local foods. I went once on my own late one evening, and another time with Kwan and Bigfatlar. Both times were good.
The menu has a lot of small and medium sized dishes in addition to the usual entrees, and both times I opted to have those in order to try more items. 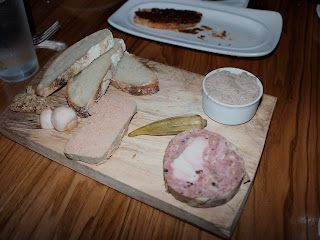 Both visits, I did have the Bacon Jam with Crostini. When I saw it on the menu, I thought of Top Chef. The flavor was nice- sweet, smokey, and bacon-y.
In the larger group, we got two different charcuterie plates. The first had duck rillettes, pheasant ballontine, and chicken liver mousse. 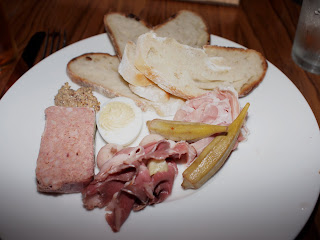 The second was called the Grand Southern Platter and had rabbit pate, duck speck, Benton's ham, and a deviled egg. All the plates had a nice spicy mustard and pickled okra and radishes. 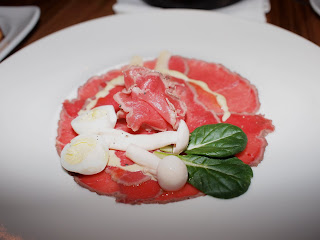 My favorite item was the foie gras preparation one night (top pic). It was seared foie gras set between two pancakes with an egg and bacon and covered with maple syrup. The waitress said the chef wanted to call it their version of a foie gras McGriddle.
I also tried the Gunpowder Bison Carpacchio with mushrooms and a quail egg. The meat was really nice, but I kind of wished the egg was raw. 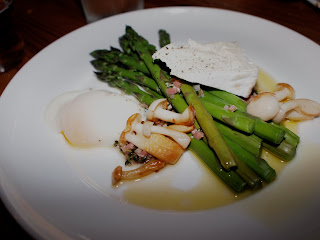 Because it's asparagus season now in the Mid Atlantic, I ordered the asparagus salad. They were blanched and served with mushrooms and a poached egg. The asparagus was so nice and sweet. 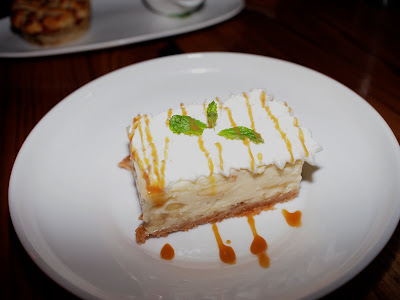 Bluegrass' dessert menu was also really good. Our table favorite was the banana creme pie.
I kind of liked the idea of the PB&J, which deconstructed the sandwich into peanut butter powder, a peanut cookie, a stewed strawberry, and a "cake" of peanut butter and jam.
The strawberry rhubarb pie with basil ice cream was very good. 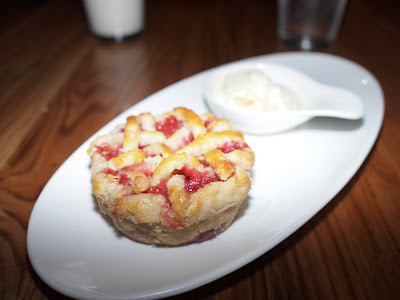 I want that pie. Herb-flavored ice cream is my new favorite thing. I had a rhubarb crumble with ginger ice cream at Firely in DC recently. It was maybe my favorite part of the meal! That started it.

Glad to hear Bluegrass was so nice, you have already been twice. Since you are the second one to do that who I know & value the opinion of, I am def going to head to Bluegrass asap.