Food at the Brooklyn Flea

Back from our TIGBG month-long hiatus (we decided to be like the French) to catch you up on some late summer eats: 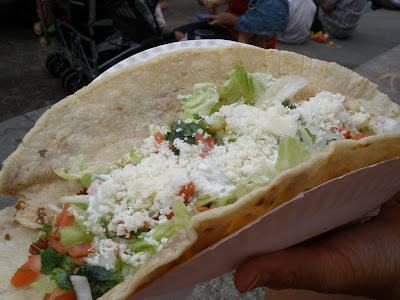 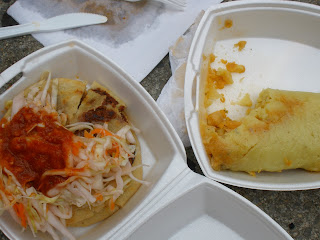 We had heard that some of the famous (or infamous) Red Hook food vendors had also set up shop at the Brooklyn Flea market in Fort Greene.

So hoping to avoid the rumored hour-long lines in Red Hook, due to the new guidelines set up by the Department of Health for food trucks, we opted to check out the Brooklyn Flea.

The flea market itself was small -- c'mon we're from NJ after all where flea markets can cover major acreage -- but the food was great. There were manageable lines for the 3 Latin food stands that had made it over from Red Hook -- taco stand, pupusa stand, and grilled corn and drinks stand. So we split up and each took a line. 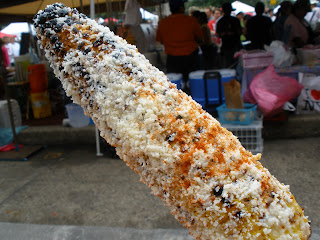 We ended up trying a huarache with pork in enchilada sauce -- this was huge - overflowing from a full-size paper dinner plate. The pork was spicy, juicy and amazing. We also got a few different pupusas and a tamale. The masa in the tamale was soft and light, but it had some strange fillings in it -- in addition to chicken it had chick peas, corn, and diced carrots. We also got the always delicious grilled corn, dipped in crema and covered in white cheese, chili powder, and lime.

I finished off the Mexican cuisine with a basil lime shave ice with a splash of strawberry from People's Popsicles. There was also some amazing pie (free samples) from La Crosta Pie Company, French-African food that looked interesting, and a variety of other food stands to try on a return visit.
Posted by fougoo at 11:01 AM