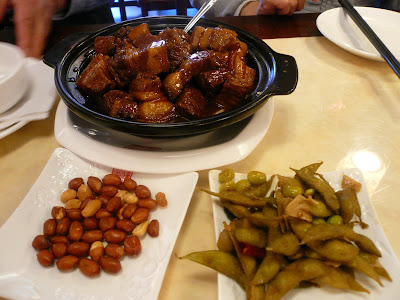 Last month, a new Chinese restaurant, Hunan Taste, opened in Catonsville, in the same shopping center as H Mart, a large Asian grocery store. I met up with the folks there this past weekend. My mom had read about the place in and ad in the local Chinese paper, where they promoted authentic Hunan style cuisine, their specialty being Mao Tse-tung's Red-braised pork.
The dish is thick chunks of pork belly cooked with a delicious sauce made of chiles, soy sauce, wine, sugar, star anise and cinnamon. It is reported that this was Chairman Mao's favorite dish, The version at Hunan Taste was delicious, and chock full of cloves of garlic. My parents gave this a thumbs up. 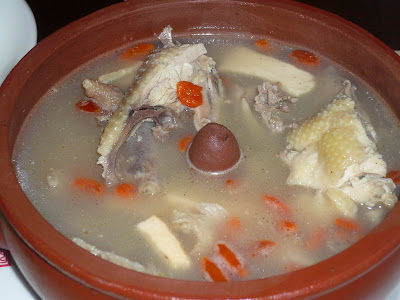 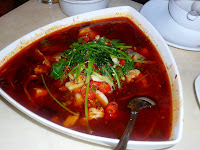 My mom got excited because the menu, which we were told by the manager was not quite finalized yet, had, in English, a steamed chicken soup. She recalled a traditional chicken soup that had a special bowl with a hole/spout in the center where the steam enters and cooks the contents. After discussing her memory of the dish, we were pleased that this was exactly that dish she remembered.
The soup was really nice. The chicken, from the steaming, was nice and tender, and there were goji berries and pieces of nagaimo, or Japanese yam, in the broth as well. My mom said that there is thought to be medicinal benefits to this soup. 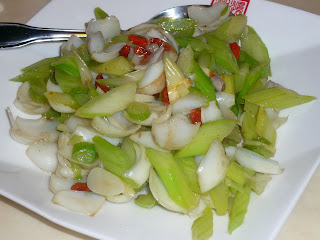 We also tried another chef's special, Hunan style spicy filets, and for a vegetable, we had celery and lily buds. Both dishes were also delicious.
We spoke with the manager after our meal, and he mentioned that eventually the final menu will have over 100 itema, and that the chefs want to remain true to Chinese cuisine rather than cater too much to Americanized Chinese cuisine. After our meal, it all sounded very promising for Chinese food in the Baltimore area.

Are you going next week?

Mmm this looks yummy, specially 'cause I loved pork recipes. Also pork helps mans with dysfunctional problems but it's better to visit Viagra Online for that.
Generic Viagra Buy Viagra