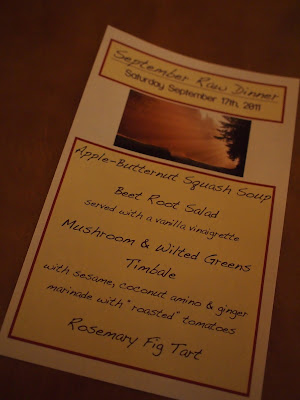 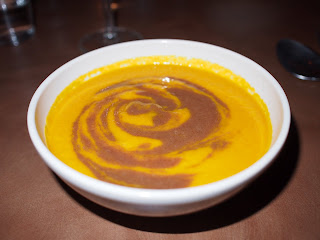 A little over a month ago, I was invited with some local foodie friends to Zia's Cafe in Towson for their monthly raw food dinner. I was a bit skeptical as my prior experiences with eating raw food resulted in me grabbing a slice of pizza afterwards as it just was not very filling, and I was ready to go get a burger across the street should the meal turn out to be not very satisfying.
We started with an slightly sweet apple-butternut squash soup. It was a bit odd at first to have this served not piping hot. The chef told us this was done via prolonged puree in a blender. Because the squash was raw, it had a slight texture of apple sauce. It was a nice starter though. 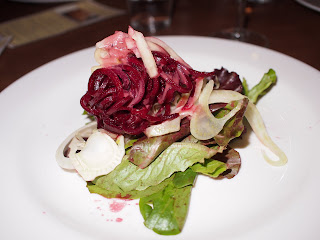 The second course was a beet root salad with some fennel, greens, and topped with a surprisingly good vanilla vinaigrette.
The combination of flavors was interesting: some earthiness from the beet, the licorice flavor of the fennel, and the sweet vanilla. 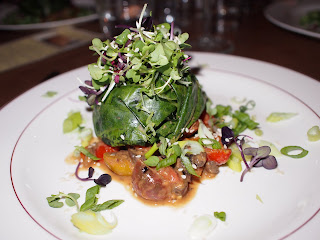 The main course was a timbale which was a large greens leaf filled with mushrooms. It arrived on a bed of greens and cherry tomatoes in a sesame, coconut amino and ginger marinade. The leaf was a bit much in it's raw state, but the mushrooms and the small salad were very good.

Dessert was a wonderful fig tart with a cashew butter filling and a walnut crust. This was really good, and by the end of the meal, I was unable to finish this because I was too full. All in all, the dinner was a good experience.
By the way, the next one is planned for this Saturday, Nov. 5th. 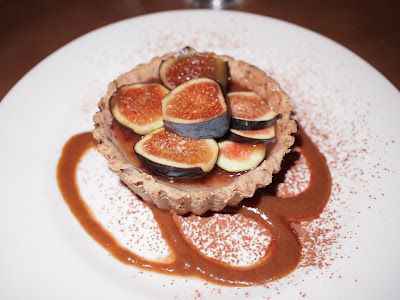 There is a wonderful Korean Raw Beef dish, that I enjoy.
http://en.wikipedia.org/wiki/Yukhoe

@SirJman I believe I've had that dish. The Vietnamese also have one, too, but the "raw food" is a vegetarian-based movement, so they don't have raw fish or beef.