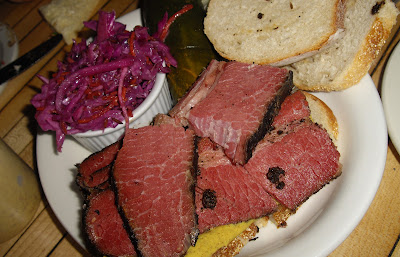 After wandering Boerum Hill for a while, we had worked up enough appetite to eat at Mile End, the Jewish-Canadian delicatessen (named after Montreal's traditionally Jewish newly hip neighborhood). 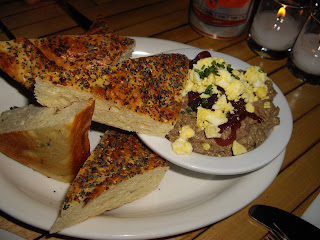 We had a big group so 6 of decided to order a bunch of dishes and share. We started out with chopped liver, served with onion relish, egg, and a "pletzel."  Even those unsure of whether they'd like liver thought it was delicious.  The onion and egg went nicely with the liver.  The "pletzel" was like an everything foccacia (not pretzel-like was we were expecting).

Next up we had the Deli Meat Board - that day's selection was turkey rillette, duck proscuitto, and salami served with toast and apricot preserves.  All the house-cured meats were excellent. 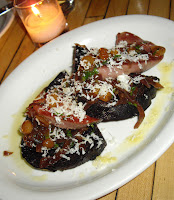 Then came the lamb's tongue with onion raisin marmalade, served on pumpernickel toast with horseradish.  I didn't really taste the horseradish, which was fine with me. The pumpernickel had lots of great rye flavor which went well with the sweetness of the marmalade.  I think they really have a knack for not only preparing the meats well, but pairing them with great flavor combinations.

Our next dish was Veal Sweetbreads with pecan butter, concord grape jelly, apple and chili.  Of course deep-fried sweetbreads are always delicious, but again, it was the sauces and toppings that made the dish stand out.  Concord jelly with pecan butter - like schpanky PB&J -- with crisp spicy apples on top - who would think of such combinations?!  Somehow it worked! 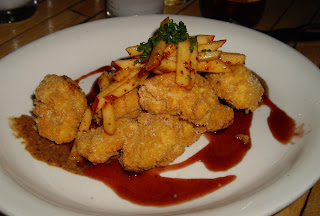 Our last small plate was warm chanterelle salad with radicchio, chevre noir, and maple walnut vinaigrette - the mushrooms were perfect and worked well with the crunch of the radicchio - another great dish.

Then came our mains.  My friend Tricia ordered her own main which was the Hoyt Dog (named for the restaurant's address on Hoyt Street).  It was a house made beef frankfurter with smoked meat baked beans, and sauerkraut.  The beans were excellent - the meat to bean ratio was heavily meaty - and very satisfying. 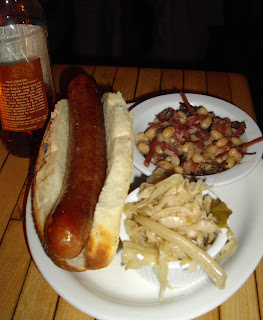 Brian chose the Trout served on top of smoked trout bisque, with pickled mustard, horseradish.  I only got a small taste of this, but it was nice.

We all dug into the Smoked Meat Deluxe.  By this point, after so much food, we just dispensed of the bread and dug into the meat in the sandwich (pictured above).  Poutine came with it on the side.  Not as good as Montreal (the cheese curds got a bit too melty in my opinion, so there wasn't that nice texture contrast of chewy cheese, creamy gravy, and crisp fries), but I can't complain too much - it was still delicious.