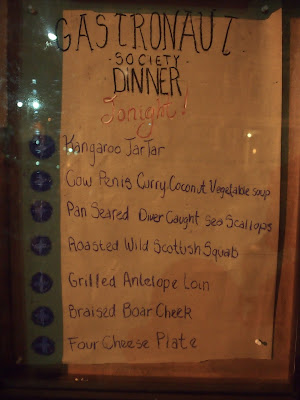 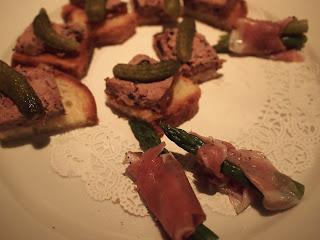 Last week, Corner BYOB in Hampden held the inaugural dinner for their Gastronaut Society. The emphasis of the society is an exploration of "exotic meats". Members get a specially engraved knife, and discounts for the special dinners.
When I arrived, before being seated, members shared drinks and some hors d'oeuvres around the bar. My favorite was an oyster topped with pomegranate sorbet and American caviar. It had a pleasant mix of briny and sweet.
We also had asparagus wrapped with proscuitto and small toasts with pate and cornichon. 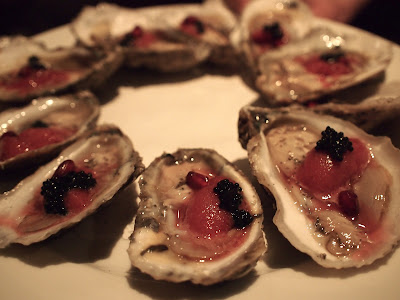 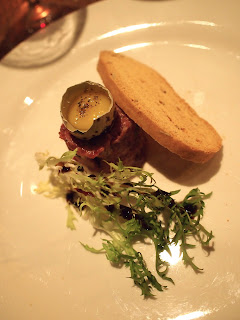 We were then instructed to take seats in the restaurant. There was no assigned tables, so we were able to sit with other diners and socialize. I liked this idea as I had come on my own. During dinner, we had great conversation and had a fun time sharing the experience of the meal.
The dinner was composed of seven savory courses, and the chef placed feedback sheets for each course that we were encouraged to fill out.
First up was kangaroo tartare with a raw quail egg and rosemary crostini. This was my first experience with kangaroo. It does not have much flavor, reminding me of a very bland lean beef. While I liked the presentation of the plate, it was just an ok dish.
I was happy that the next course took us into the wonderful world of offal. We had cow penis in a vegetable coconut curry broth. The penis had the texture similar to beef tendon or sea cucumber- firm, gelatinous, and it took on the flavor of the broth. While I wished the dish would have been served piping hot, I liked it. 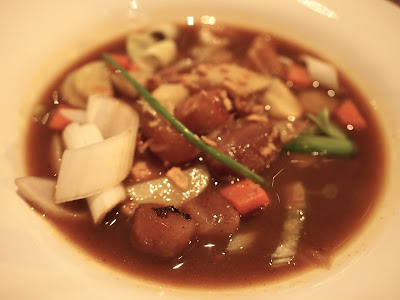 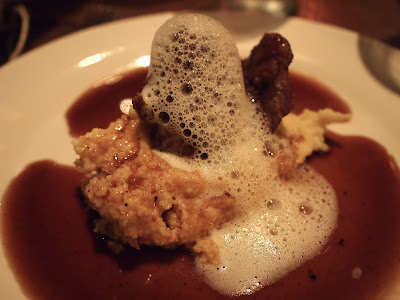 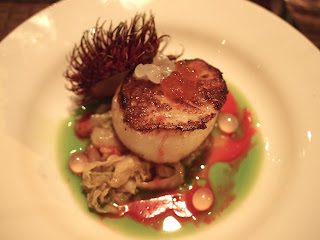 The third course was braised boar cheek on a bed of parmesan truffled polenta covered with a foie gras froth. The cheek fell apart easily, and as you ate more, the foie gras flavor became more evident.
The fourth course was actually my least favorite as it was the least "adventurous". It was a pan seared diver scallop, cooked beautifully, on a bed of Napa cabbage with basil oil, prickly pear, spherical juice, steelhead caviar and a little rambutan. 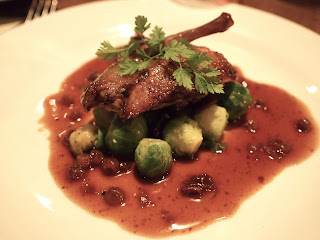 The next plate was a roasted wild Scottish squab and brussel sprouts with a jerk lingonberry sauce. The meat of the bird paired well with the slightly tart sweetness of the sauce.
The last main dish was antelope loin with a green apple mustard sauce, salsify with Cherry Glen goat cheese, and bone marrow pommes Parisian. The antelope, particularly with the apple mustard was just great. I also liked the salsify. I don't think I could appreciate the marrow in the potatoes though. 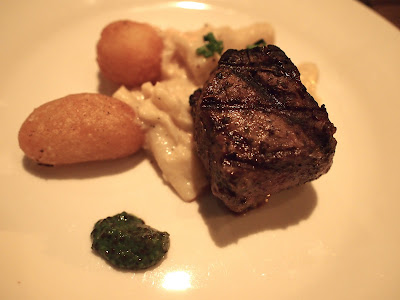 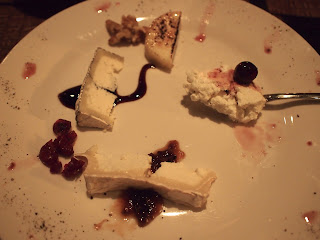 The final course was a cheese plate with selections from Cherry Glen. My favorite was the Monocacy Silver that was served with dried cherries. We also had a fresh goat cheese, the Monocacy Ash, and  slightly bruleed Monocacy Crottin.
The next society dinner is in January. Can't wait.
Posted by 1000yregg at 11:28 AM

Part of the problem with kangaroo is that frozen is the only way to get it, for obvious reasons.