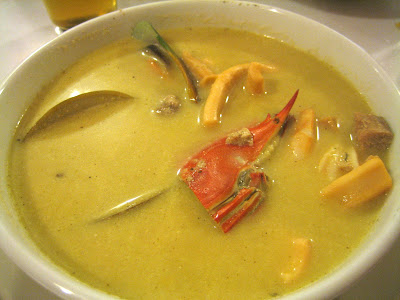 Debbie's friend Carlos took us to a Costa Rican restaurant in Trenton called Donde Luis. Redneckhunter, Kim, and I arrived first and entered through the bar. It was like a movie - the music stopped, and the bar patrons turned to look at us like "You're not from around here." When the waitress took us to our table, she was a bit concerned, "Do you speak Spanish?" she asked, because she only spoke a little English. We assured her that the Spanish speaker was on his way. 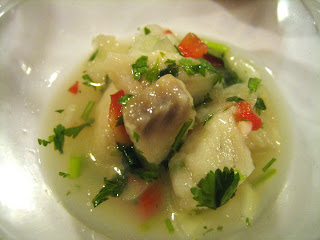 Debbie and Carlos arrived shortly and took over the ordering. We started with ceviche tico de pescado (costa rican fish ceviche). Then we got two of the soups, really more like stews: the sopa marinera (seafood soup with rice), a house specialty); olla de carne (meat soup with rice). The seafood soup had a delicious broth flavored by crab, fish, squid, and clams. I could have just kept eating the broth with rice all night. The meat soup had yucca, chayote, and corn, along with hunks of beef. Both of the soups were big enough for a full meal, perfect for sharing. 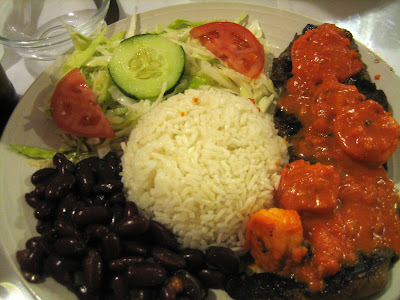 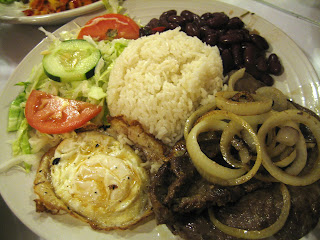 The churrasco was really tasty. Rice and beans were perfect with some of the spicy sauce they brought to the table - really nice kick.

Throughout our meal, we'd hear cheers and shouts from the bar in response to the futbol game on the TV, but the party really started kicking up in the bar when the karaoke started. The waitress brought out the list for us to peruse - I think I only found 3 songs in English I could have sung - Christina Aguilera, Lou Vega's Mambo No. 5, and Mariah Carey.

Do you happen to have an email or Twitter address for the restaurant?

No - it's a pretty small place - I doubt they even have a website. But I'm sure you can find a phone number in the Trenton phone listings. Good luck!

Hello I want to congratulate to them by its site of the Web of the excellent looks like entertained and very good very to me it elaborated. I invite them to that they explore a little on my Web site.

Costa Rica is a country with an extremely sense of freedom. The landscapes are for many people the greenest in whole center America. The chances of investments are very high; the average of Americans, European and people of the entire planet who are buying here is up in the sky!!!

I really enjoy this kind of food because my mom who live in Nicaragua use to prepare this kind of dishes actually the third one is called "Revueltijo" at least she says so.