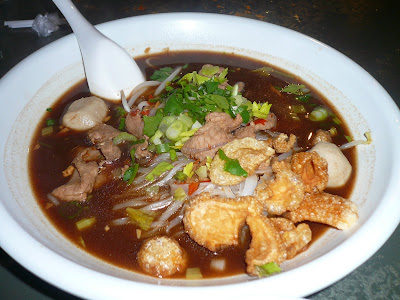 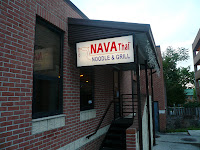 Been reading recently about a dish called the Floating Market noodle soup, so I found a place called Nava Thai in Silver Spring, MD to try it.
The restaurant is modest, in a small parking lot shared with a Thai grocery, but inside the food was incredible.
The floating market noodle soup had the highest spice rating on the menu, 3 lightning bolts. The waitress even cautioned us on the level of spice, but we elected to pull no punches. 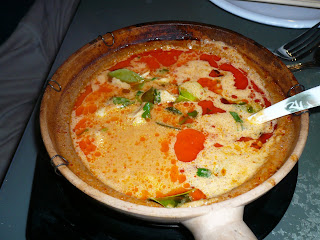 The soup was beautiful- the broth had a brown color- likely from cow's blood- it had initially a sweet taste- lime?- but then the heat was very obvious. My friend Mike had 2 spoonfuls and he proceeded to turn flush, start sweating, and his eyes turned red and he started to blow his nose. 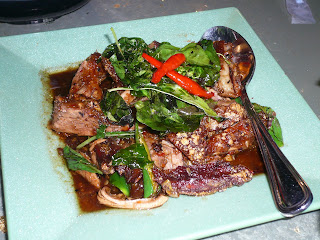 Visible in the soup were pieces of pork, meatballs, bean sprouts, and pork rinds. The noodles, which I read are homemade, were simply delicious- holding the flavor of the fiery broth. 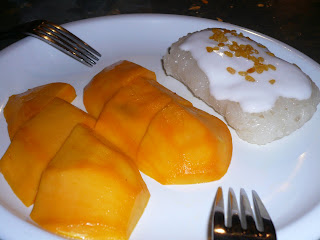 After the soup, we tried some other dishes: pineapple curry with chicken, a delicious crispy duck kaprow with holy basil, and sweet rice with mango. Everything was a postscript to the soup, but still pretty darn great.
Nava Thai
11315 Fern St
Silver Spring, MD 20902
(240) 430-0495
Posted by 1000yregg at 9:03 AM