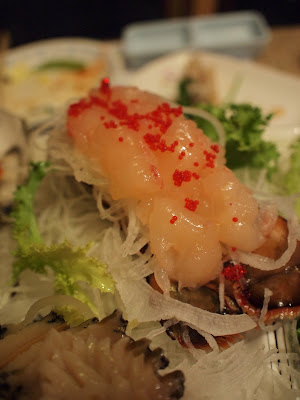 I often find that going to Korean restaurants can be challenging. Usually, websites for their restaurants are completely in Korean, and at the restaurant, their menus are only partially translated. However, with research and the blessing of Korean speaking friends, I'm discovering incredible Korean places nearby. 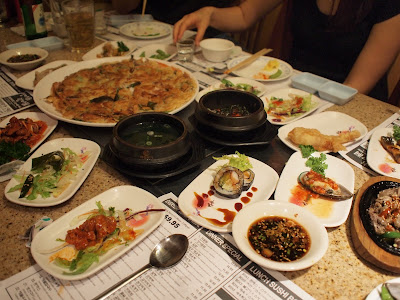 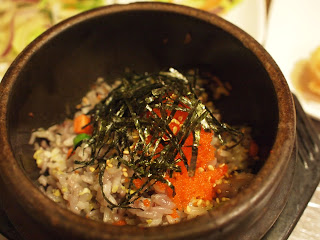 My friends Anna & Davis told me about a Korean style sashimi place deep in Ellicott City, just west of the Enchanted Forest site. It used to be called Bethany Seafood Restaurant, but they recently changed their name to Kimko Seafood. They told me that this place will often have San Nakji, the live octopus sashimi, as well as lobster sashimi.
We went this past evening with a group of friends and ordered a large sashimi course. Alas, they had run out of the octopus that night, but I tried several kinds of sashimi that were new to me. 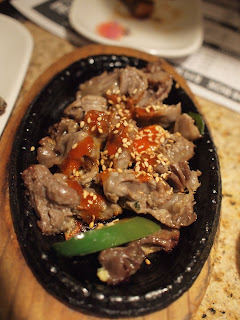 After toasting with some shots of soju, we started with the bonchon appetizer courses. They warm you up with a wonderful cup of congee. We then proceeded to receive 19 different items on plates and in bowls to get us started. This included a large seafood pancake, a soup with seaweed, potato salad, salmon collarbone, cooked eel, and several other preparations of fish. My favorites were the plate of grilled chicken gizzards, and a hot stone bowl of rice with fish roe. It was an unbelievable spread. 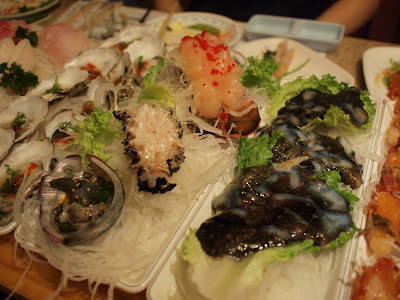 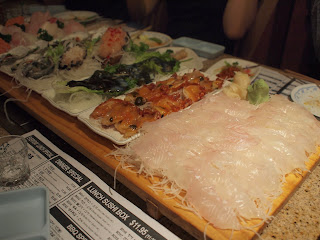 They brought in the "large" sashimi platter which was a 1 meter long wood board chock full of sashimi. Anna told us that Koreans eat sashimi a little different that the Japanese. First, while they sometimes use soy sauce with wasabi, they prefer to dip the fish into kochujang, the Korean style red chili pepper paste.
Also, she told us Koreans prefer fish that tend to be more chewy than the Japanese. Whereas tuna is the staple fish in the Japanese palate, the most popular item for the Koreans is halibut. This was reflected in our "plank" of food as a quarter of it consisted of halibut. I estimate we were served about 40-50 pieces. 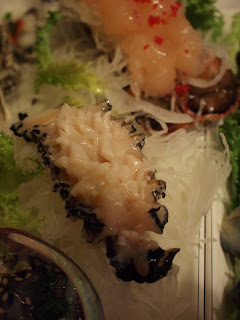 On the other end of the board, we received sashimi items, I was accustomed to from eating at Japanese places. We received about 60 pieces of delicious white tuna, salmon, and yellowtail.
In the center, they put the specialty items of the house. These sea creatures were stored alive in tanks in the front of the restaurant, and were dispatched only a few minutes before they arrived at the dinner table.

The first item I tried was the lobster sashimi. We were served only the tail. The rest would come later. It came split open and sliced into bites and topped with some roe. The raw lobster still has a wonderful sweet flavor, but since it is uncooked, the texture is different. There is a little resistance when your first bite in, but just past that, it melts in your mouth. 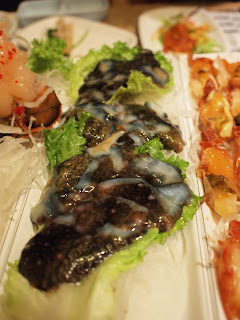 Next I tried the abalone sashimi. It's texture was close to being like squid or a mushroom. It does not have a very strong flavor.

I was very excited as well to try sea cucumber sashimi. I love cooked sea cucumber which has a slightly rubbery texture like tendon when prepared this way. In it's raw form, it is a completely different experience. It is very briny in flavor, and the texture is similar to raw octopus. I loved it. 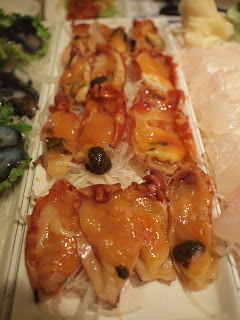 Our last and final item might have been the least popular at the table. That was the sea squirt sashimi. I wasn't sure how to eat this, and I did not realize they had a soft shell which you could not chew. Instead you just eat the soft bits. My experience was varied with this item. The first piece I had was bitter, but subsequent bites were less so. I would say I am neutral to sea squirt sashimi. 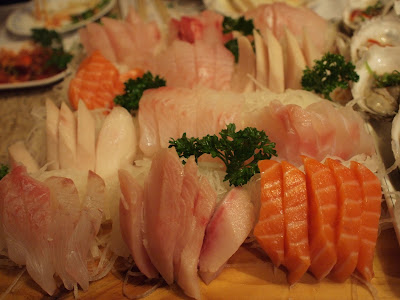 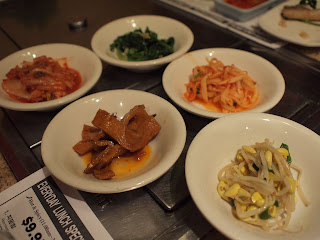 When we had our fill of sashimi, the remaining parts of the lobster, the claw and the head, followed. Of course, we first welcomed 5 more plates of vegetable bonchon to the table.
With the lobster, they take the remainders and, with some fish, toss it into a spicy broth to cook the whole time we were eating. The resulting soup had a flavorful broth that, despite already eating my fill, I could not resist going for seconds and thirds.
With that course, the meal had ended. We were served sliced oranges for dessert, and we were done. It was an incredible dinner. I'm already looking forward to going back to try their San Nakji. 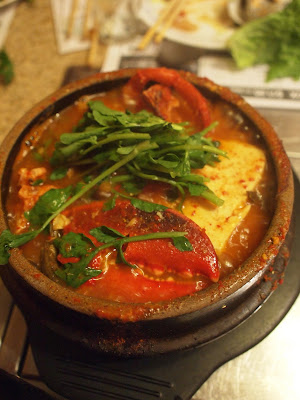