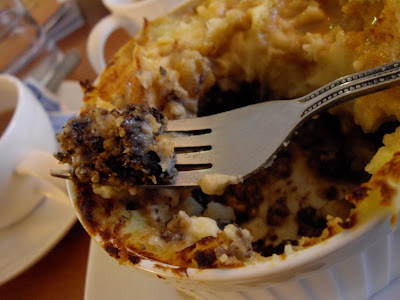 After Ireland, we headed off for Scotland where, in the words of Mike Myers, most of their cuisine is based on a dare. First order of business, I had to try haggis.

I loved it! Mine came nicely baked in a ramekin with a mashed potato crust and not cut out of a sheep's stomach, though I think I would have liked it just as much that way too. I was expecting it to be more like scrapple (though later when we had it for breakfast, it did come fried in slices), but this one at the Scotch Malt Whisky Society was like shepherd's pie, only with sheep offal instead of meat. I also liken haggis a bit to corned beef hash with again sheep innards instead of corned beef, and oatmeal instead of potatoes. 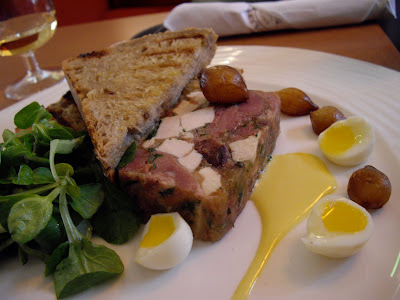 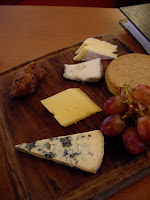 We also had a nice ham terrine with quail eggs, and a very yummy cheese plate for dessert. And of course Redneckhunter happily sampled several drams of whisky.
Posted by fougoo at 11:31 AM

So glad you enjoyed the SMWS! Now I know exactly what to get you as a belated wedding present!!!!!