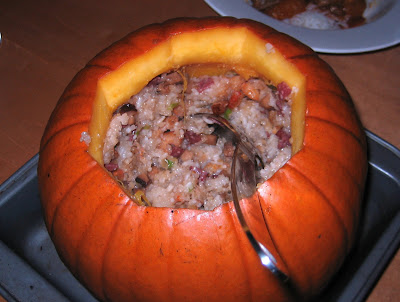 For our most recent girls cooking night, we went seasonal with an all-pumpkin feast. The most interesting thing was that given pumpkin's squashy-absorbent nature, all five dishes had very distinctive flavors.

I steamed sticky rice in the pumpkin. I made the sticky rice first, then mixed it with stir-fried diced shitake mushrooms, dried shrimp, green onions, shallots, and since I don't like Chinese sausage, sweet Lebanon bologna, mixed with sesame oil and a little soy sauce. I stuffed the rice mixture in the pumpkin and steamed the whole thing for about an hour. I think it could have gone quite a bit longer to soften the pumpkin flesh even more, but well we had plenty of pumpkin to eat that night. 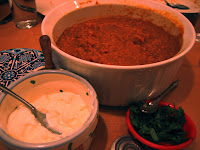 We started with Debbie's pumpkin lentil soup. The yellow lentils were still a little crunchy -- toothsome, as brownie likes to say. The yogurt added a nice tang. 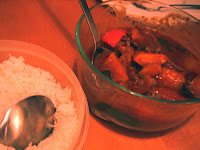 Kim made a pumpkin risotto, yet another totally distinct flavor. With lots of butter and rosemary and thyme or tarragon, someone said it reminded them of Thanksgiving. 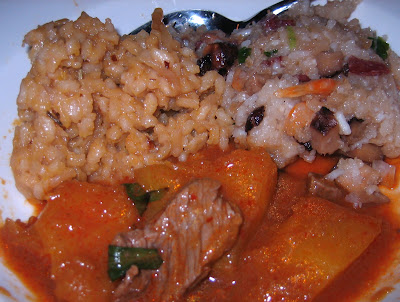 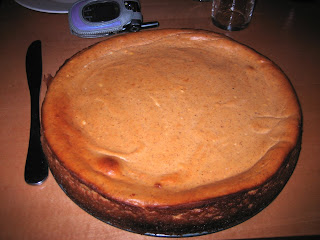 Brownie finished us off with a delicious pumpkin cheesecake. I don't even like cheesecake, but this one was really tasty, especially with its gingersnap crust.

Finally, Marian couldn't make it that night, but on a previous occasion, she had wowed us with a nice, creamy, and fluffy pumpkin souffle. 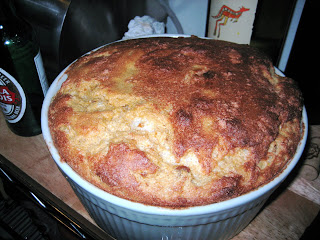