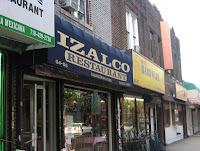 What's the perfect bachelorette party for a foodie? A day of ethnic eating in Queens of course! For brownie's girls day, we made a trek up to explore Roosevelt Avenue in Woodside and Jackson Heights.

First stop was Izalco, a Salvadoran restaurant. We were stopping here based on Robert Sietsema's glowing words: "Culinary triumphs include elote tamales -- husk-wrapped, studded with corn kernels, and light as souffles." 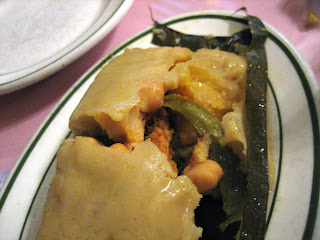 We got one with chicken. They truly were light - probably the lightest masa I've ever had in a tamale. And wrapped with plaintain leaves rather than corn husks. So good I wanted to ordered another one, but we had more stops to go and need to pace ourselves. 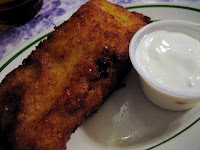 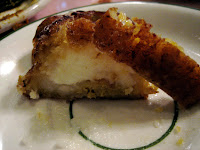 We also tried a fried elote tamale with crema. Interesting -- never knew a tamale could be unwrapped and fried -- it was sweet too like corn bread.


For "dessert" we had a plaintain cake stuffed with sweet crema -- like a plaintain twinkie. Some of us liked it, some didn't. Me personally, I liked the cream inside but thought the plaintain was kind of mushy and starchy. 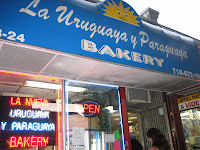 Second stop was La Uruguaya y Paraguayita Bakery. Sietsema said their spinach empanada was "worth walking a mile for." I much prefer baked empanadas like these, rather than fried. Fresh out of the oven, these would have been amazing. Microwaved to heat them up, they were still pretty damn good. 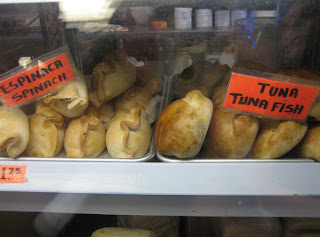 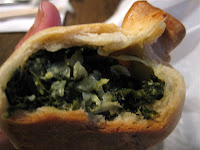 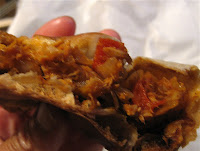 We got a spinach and a tuna - marinated the Spanish way. We were also curious about the barrels and barrels of little baked nuggets that were all over this place.

Marian bought us a bag -- they were like an oyster cracker-tarralle. Dry and crunchy, slightly peppery and seasoned lightly of fennel. 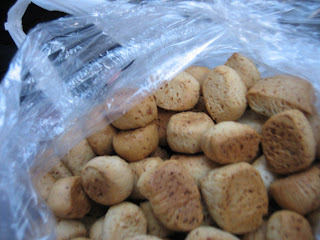 funny signage- i really needed help identifying the espinach as spinach and tuna as tuna fish.