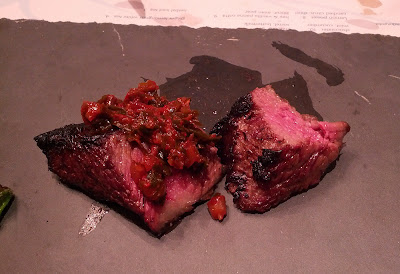 We were around over Memorial Day weekend, the opening weekend of Scott Anderson's (Elements) newest restaurant in downtown Princeton.  Small plates, lower price point than Elements, BYOB and great central location -- what's not to like, right? 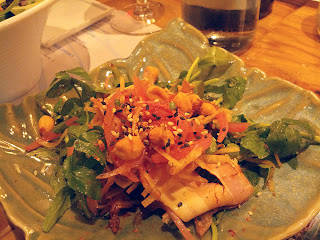 The answer (for now, at least) is service. When we walked in we were told that it would be roughly 20 minutes to seat our party of 5 (they only take reservations for parties of 6 or more), but we were shafted when some "friends of Scott" came in behind us.

Over an hour later, we finally sat down. Not sure, but seemed like a couple other parties were in the same boat - there was definitely confusion as to who was getting seated and who wasn't.

The waitress was nice and helpful and recommended getting 2-3 small plates per person, extras of things that everyone wanted to taste.  So we made a checklist on our place mat menus and were excited to finally eat! 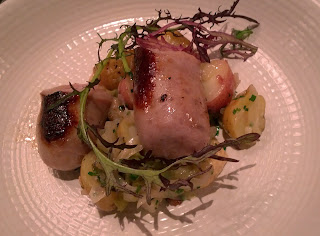 No complaints about the food, but there was no sense of "coursing" or paying attention to the pacing. Plate after plate were just shuttled to the table. We'd have to quickly finish off a previous plate in order to make room for the next, and flag someone down to take it away. (I also didn't get why stuff had to plated on such large plates given the concept.)

Here's the rundown of what we had (not all pictured): 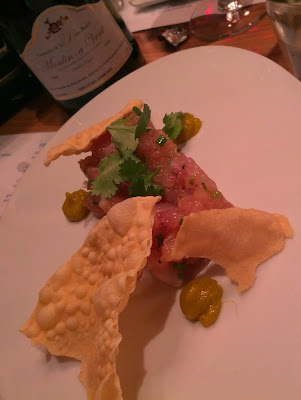 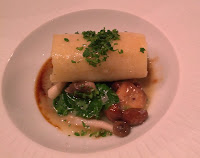 All in all, it was just the feeling of being rushed through our meal.  Frustrating especially since we waited so long.  Our wait time was longer than our meal time.  Maybe we shouldn't have been so decisive as to order 15 plates all at once, and should have added more to our order halfway through... 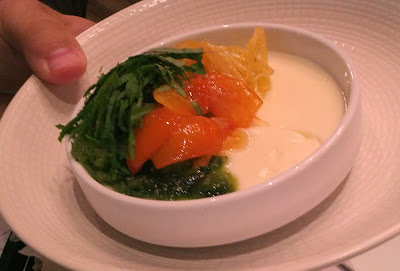 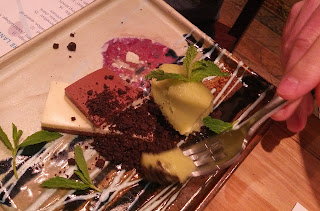 Desserts came highly recommended, so we ordered one of each.  The Lemon posset with candied citrus and shiso was the favorite - such an interesting flavor and so refreshing yet luscious at the same time.

The other one that surprised us was the innocuously named Chocolates.  The cucumber (melon too perhaps?) sorbet that accompanied it was great!

The other two -- Rhubarb cobbler with sorrel and buttermilk and  Hay & vanilla panna cotta with biscuit and asian pear -- were delicious as well, just less surprising. 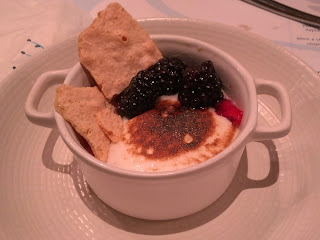 Let's hope they get it together with the seating and serving.  I have the feeling that going back, we'll try to make sure we get 6 people together and make a reservation.