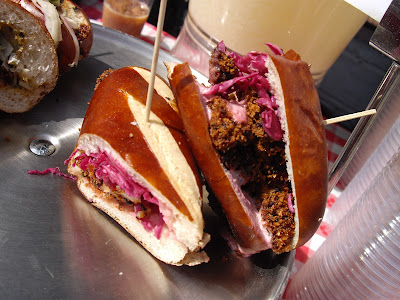 My cousins recently moved to DUMBO, and so did Smorgasburg! So on a recent weekend visit, we set off for a Sunday outing to the Smorg. 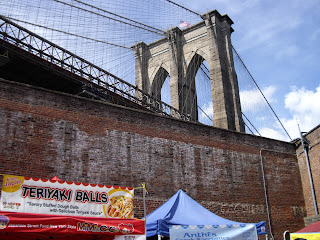 First off, what an amazing setting for it, under the span of the Brooklyn Bridge in the old Tobacco Warehouse shell, and the old timey Jane's Carousel nearby.

Most of the Smorg regulars were there.  Probably fewer prepared food vendors, but plenty of eating options.

After a walk-through, I was sucked in by the pretzel rolls on which Schnitz served their chicken schnitzel sandwiches. 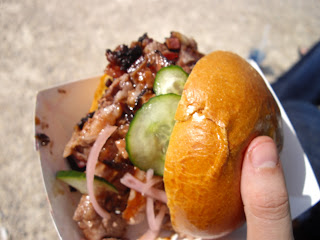 Redneckhunter went for a brisket sandwich - he was a bit disappointed that he got mostly burnt ends, and not so much fatty meat. 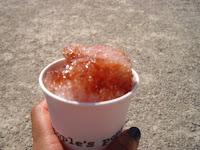 I finished things off with not one, but two, frozen treats -- a plum shave ice from People's Pops, and a gourmet lemon slushie from Kelvin Natural Slush Co.

Smorgasburg
Sundays in DUMBO in Brooklyn Bridge Park
Through November 18