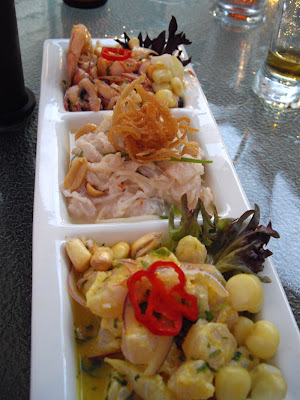 Ever since Redneckhunter and I honeymooned in Peru, we've been disappointed with ceviche back home, until we heard rave reviews of El Tule from a friend of ours who had also been to Peru.

When you see El Tule from the street, there's no indication that it's a Peruvian restaurant.  The sign says Mexican Restaurant, with only a hand written chalkboard mentioning Peruvian cuisine.  Indeed they have 2 separate menus. 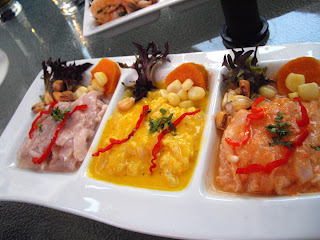 We were definitely there for Peruvian though, and quickly made them take away the Mexican menu.  We had even stopped at the liquor store to bring a six-pack of the native Cusqueña beer to the BYOB -- which the owner noticed and approved of.

There was a lot on the menu I wanted to try, but we had to make some choices.  So to get the most variety in fish, we opted for the ceviche trilogy and the tiradito trilogy.  Ceviche is marinated raw fish, so the texture gets firmer almost as if it were cooked -- the 3 varieties were Limeño (white fish marinated in lime, red onions, and cilantro), Mixto (with fish, shrimp, octopus, and calamari) - both served with those great big Peruvian corn kernels - both fresh and toasted and sweet potatoes - and Chifa (Chinese-influenced with pickled vegetables, black sesame, and peanuts).  Tiradito, instead, is not marinated -- just raw fish (like sashimi) with a sauce.  The three varieties were

Then, so that we wouldn't overdose on fish, we also ordered a steak -- Bistec a lo Pobre, or "Poor man's steak."  We liked how the menu referred to its "beefy goodness" complemented by fried potatoes, fried plantains, fried egg, and rice. 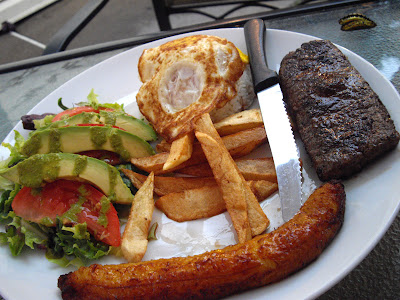 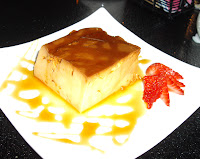 We were pretty full and thinking about passing on dessert when 3 words were uttered: "tres leches cake."  But since the other desserts sounded tempting too, we also got a flan and rice pudding.  Actually the tres leches was disappointing, so it's good we got the others.  The rice pudding was voted the favorite, followed by the flan, which had a nice caramelized, almost coffee flavor. 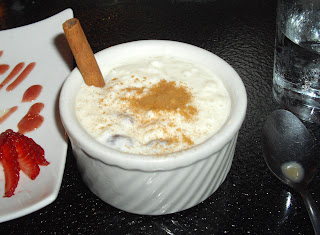