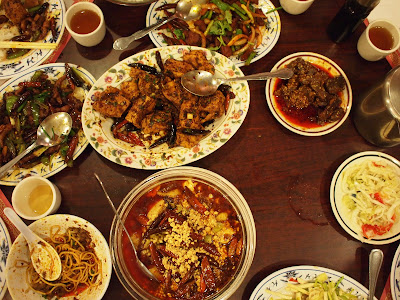 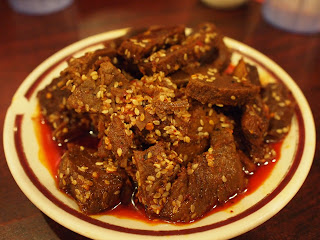 I can't believe it's taken me years to get to Joe's Noodle House in Rockville, MD. It's truly a delicious bastion of Szechuan style cuisine in the MD/DC area. When I went to Joe's, my friends told me that my ability to speak some Mandarin Chinese would ensure our dishes would be "Chinese" hot. Because the menu items at Joe's are coded, I'm going to include the letter-number combinations for each dish. 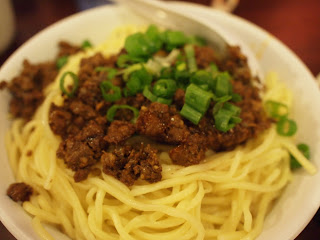 The dishes in our meal had a wonderful progression from salty & sour, to mild tingling, to numbing, and then to nose running hot. We opened with some small plates- spicy & sour pickled cabbage (A05) and scallion pancake (A35)- good items to cool the burn of the items to follow.
We got the Szechuan beef jerky (A52), a cold dish with chunks of beef that was chock full of Szechuan numbing spice. It wasn't that hot, just tingly. 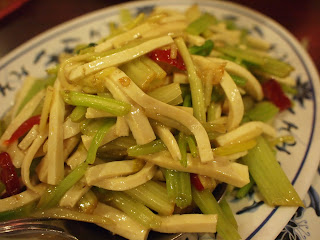 I'm a big fan of Szechuan Dan Dan noodles (N11). It's the spaghetti Bolognese of Chinese food except spicier and with sweet sesame paste. The version at Grace Garden is my favorite, but Joe's take was good.
Our next dish was a special of stir fried tofu, peppers and celery. 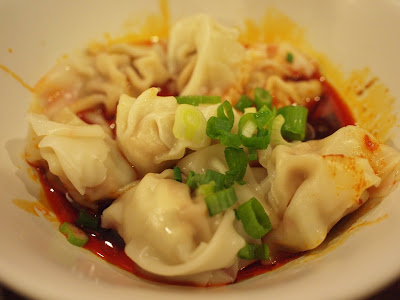 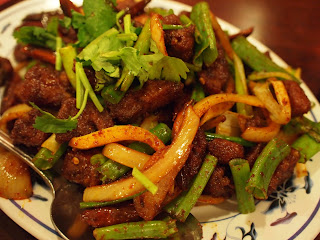 The wontons with red hot sauce (W01) were fresh and light.
We then had back to back dishes that looked the same, but the flavors were very different. First was the Tibetan style lamb with cumin (H14). The slight bitterness of the cumin pairs well with szechuan peppers, and the heavier flavor of the lamb. 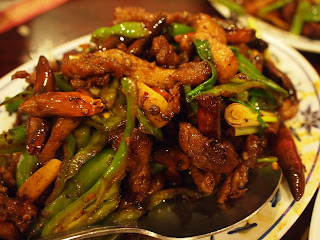 The second item was triple pepper chicken dry sautee (T20) which had a lighter texture because of the chicken. This actually had more heat than the lamb dish. 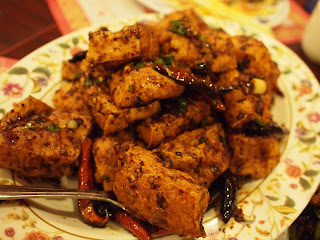 The spice level continued to increase with the next dish of spicy & tasty fried bean curd with pork (F32). The tofu was light and had a little crunch on the outside, but it was completely rubbed with spicy chiles.
Our final item put the spice level over the top. We had the fish filets and soft bean curd in Szechuan sauce (H20), which almost was like a Ma Po tofu except loaded with fish and whole chile peppers. You had to eat this with rice just to cool it down.
By the end of the meal, my whole mouth was nicely burning, and we had plenty of leftovers to take home as well. 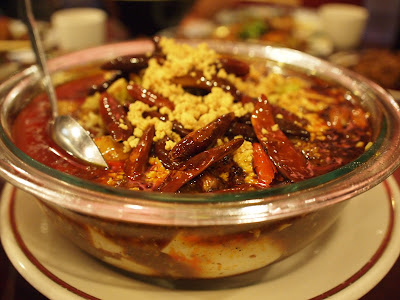