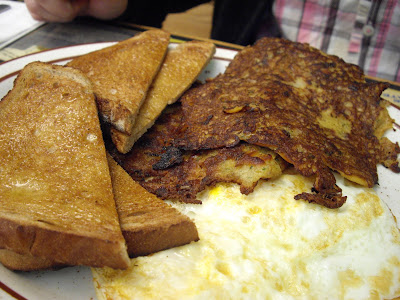 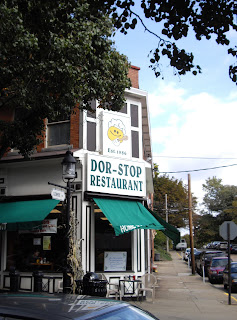 Since we weren't able to get breakfast in the Strip District, we decided to head first to the Warhol Museum, and then grab brunch/lunch before we got back on the PA Turnpike.
Since we were driving out anyway, we figured it wouldn't be too far to go to the Dormont area of Pittsburgh, and check out a place we had seen on Guy Fieri's Diners, Drive-ins and Dives.

The Dor-Stop hit the spot. Redneckhunter got eggs, potato pancakes and generously buttered toast. I got banana oatmeal pancakes. Again, they don't skimp on the butter out in Western PA.
Best part, I think our meals (way too much for me to eat) were only $3.99 each.
The Dor-Stop Restaurant
1423 Potomac Ave
Pittsburgh, PA
(412) 561-9320 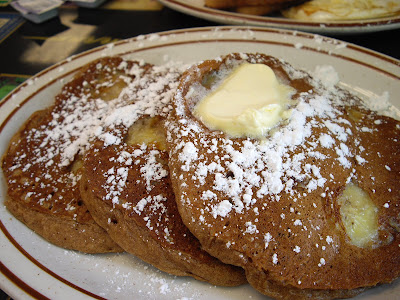 Posted by fougoo at 6:04 PM No comments: Links to this post 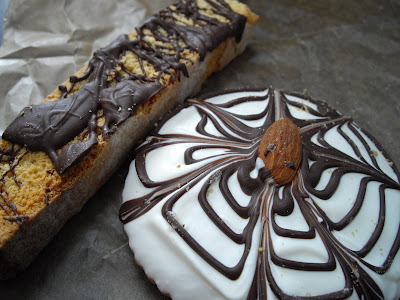 I had read about Pittsburgh's Strip District, the foodie neighborhood. On Saturday afternoon, we arrived just as everything was closing at 5 pm. What's with these cities where things close early? And it was way too early for the bars to get going. But we did get Primanti Brothers, and vowed to come back the next day.
Sunday morning, the Strip District was indeed hopping. Church had just let out, so the lines at Pamela's Diner and DeLuca's (2 places we had scoped out for breakfast the night before) were out the door. We settled instead for wandering and snacking. 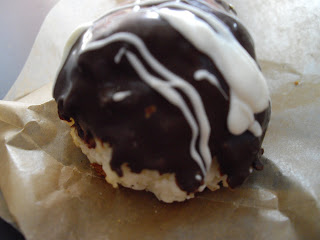 One stop was Enrico Biscotti Company where we get the above black and white cookie and a classic biscotti with chocolate, and the chocolate dipped macaroon on the left. The macaroon was good - not quite was good as The Little Chef in Princeton - but good. I also couldn't resist getting a peanut butter and bacon biscotti that they had. It was supposed to be a dog biscuit, but I figured it was safe for people. I guess dogs don't complain when things are bland - I couldn't taste much peanut butter nor bacon. 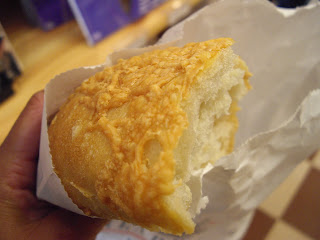 Another great stop was the Pennsylvania Macaroni Company. Redneckhunter loaded up on all kinds of pasta, good flour, coffee. I got fresh handmade mozzarella, and some great bread.
As we wandered, we both agreed that if we lived in Pittsburgh, this would be a weekly trip to the Strip. It was really one-stop shopping. In addition to the Italian establishments, there was a Chinese market, a Vietnamese grocery, Korean, Mexican, Middle Eastern groceries, a fish market, a meat shop, a chocolate store, Penzey's Spices where you could get just about any spice you can imagine, a cooking supply store, several coffee roasters and cafes, ice cream, not to mention all the restaurants, and lunch carts we didn't get to try. 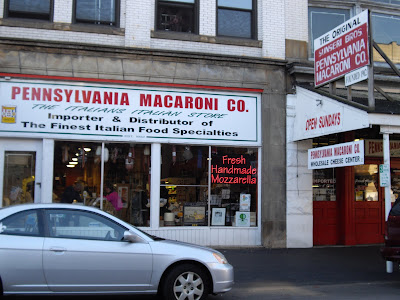 Posted by fougoo at 6:00 PM No comments: Links to this post 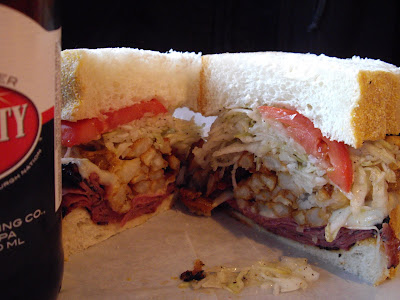 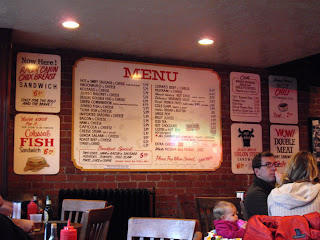 We couldn't go to Pittsburgh without eating at the famous Primanti Brothers sandwich shop. Located in the Strip District (a neighborhood of markets and other foodie delights - more on that later), the restaurant started out as a lunch stand in 1933. Apparently the lore is that they sold sandwiches to truckers on the go. One day, a trucker drove up with a load of potatoes that he worried had frozen in his truck. So Mr. Primanti fried up a few of the potatoes, determined that they were good, and went ahead and put them on the guy's sandwich. And thus the perfect trucker meal was born - an entire meal between 2 pieces of bread. 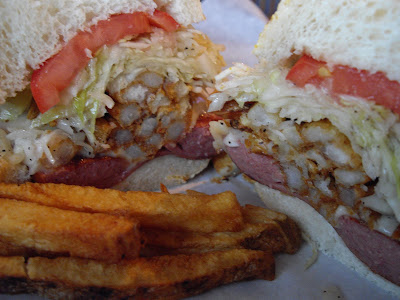 I ordered my sandwich with knockwurst and cheese, redneckhunter got pastrami and cheese. All Primanti sandwiches are served on thick slices of Italian bread, with tomatoes, french fried potatoes, and homemade cole slaw. Cheese is provolone only - no American, no cheddar - just provolone. And Italian bread only - no wheat, no rye - just Italian. For me, the cole slaw is what made the sandwich. Instead of mayonnaise, the slaw is vinegar-based, and was the perfect thing to go with salty meat and starchy potatoes. 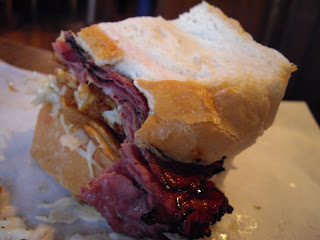 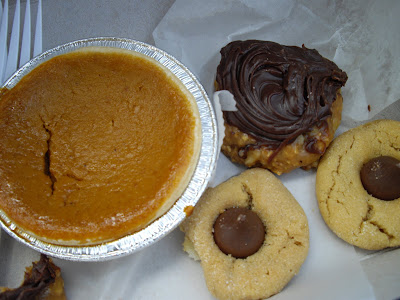 As as first-generation Chinese-American from the East Coast, it may seem strange, but I love the heartland. On a weekend trip after seeing Falling Water, we stopped at a bakery on the way back to the PA Turnpike, where we got a mini pumpkin pie, a gooey chewy chocolate frosted peanut butter no-bake cookie, and some peanut butter Hershey kiss cookies. They know the value of butter out there. 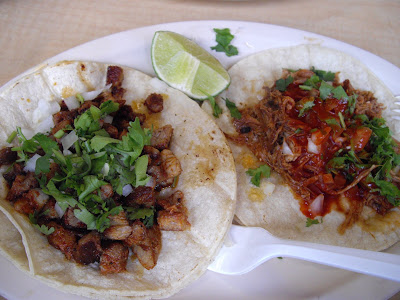 Redneckhunter spent a summer living in New Rochelle with a bunch of guys, not a lot of money, no real transportation options, and with a weight requirement (don't ask). While most of the guys ate at Subway every day, Redneckhunter instead went to Mister Taco.

So when we were passing through the other weekend, visiting my cousin, we stopped there for a snack. We shared 3 tacos - carnitas, carne asada, and res (beef). The place is a dive, though they had actually moved 2 doors down to a new corner location, but so tasty. 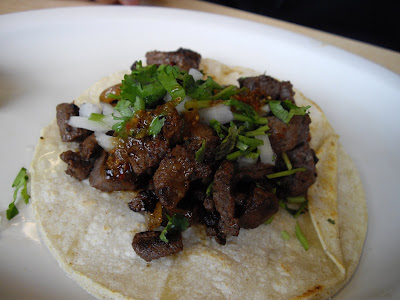 Posted by fougoo at 11:14 AM No comments: Links to this post 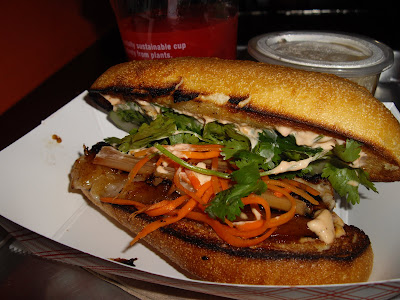 I love Kampuchea in the Lower East Side, so I've been trying to get to their sister store Num Pang Sandwich Shop. On our last shopping day, armed with a buy-one-get-one-sandwich-1/2-price coupon from Daily Candy, petiteseour and I finally made it there.

I ordered the pork belly along with a corn on the cob with chili mayo, and she ordered mackerel with watermelon juice. Both sandwiches come dressed with cilantro, carrots, cucumber, pickled radishes, and chili mayo - they make a point of stating there can be no substitutions. Petiteseour thought her fish was cooked really well, and loved the watermelon juice, though she was scraping off the overabundance of chili mayo. I felt the same way about the mayo - I'm not against it, but the overreliance on it got to me. Especially when you're already dealing with fatty pork. I actually found it too fatty - if you're a regular reader of the blog, you'll understand how shocking this is! 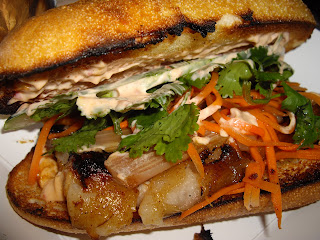 And my corn, which I failed to take a picture of (hands covered in mayo) - I had a problem with that as well. We ate at the store, not takeout, yet, my corn came wrapped in foil, so just a gloppy mess upon opening.

One good point - the bread was awesome - crusty, chewy, all that you'd want in good French bread. But I've had much better banh mi (in Vegas and Honolulu - where the Asians represent!). Once again, New York is just not the place for Vietnamese, it seems. 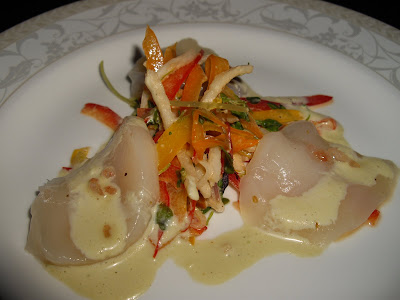 We weren't sure what to expect with the Open ChefAMe event in August cooked by amateur chefs, and we were so pleasantly surprised, that we were really looking forward to the Pro ChefAme event in September, billed as "a nine course no holds barred competition of culinary mastery." It was to feature 3 professional chefs cooking with 3 set ingredients Iron Chef style.

Interestingly, I think we all agreed that we actually liked the amateur event better. Not that I'm complaining about this one. Still the best deal in town - $40 for 9 courses with beer pairings! And still a lot of fun, which I think has a lot to do with founder Jesse and his co-organizers. Such a great idea, I wish I had thought of it myself.

But anyway, back to the food. The event was held at Tavern 17 in the Warwick Hotel, and the 3 contestants were all chefs there: Chef Cathy Chambers, Executive Chef Ben Young, and Sous Chef Christopher Spellman. The 3 ingredients were scallops, chicken, and beef tenderloin. And there were 3 judges sharing their reviews and scores to the crowd. 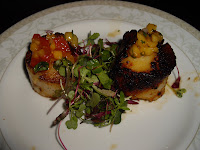 First round: Chef Cathy made cajun crusted sea scallops with warm peach salsa and rainbow micro greens salad. The portion was huge - 2 fat scallops. It was good but not that exciting, plus more than one of us had a bit of grit. Mine was so big I chipped a tooth on it!

Executive Chef Ben made a scallop ceviche with tri-pepper and daikon salad with tobiko and wasabi vinaigrette and pink sea salt (pictured top). After the chipped tooth, I was a little wary crunching on pink salt - I could have done without it. But everything else on the plate was delicious! Wonderful flavors, melt-in-your-mouth scallop.

Sous chef Christopher rounded out the dishes with sauteed scallops filled with pesto atop creamy polenta and rosemary tomato consomme. Reading the menu, I thought this would be awesome - I imagined juicy bursting sacs. But sadly, not enough pesto, scallops a little overcooked, and tomato soup base was just weird. (and sorry, forgot to take a picture). I also didn't keep track of the judges scores, but 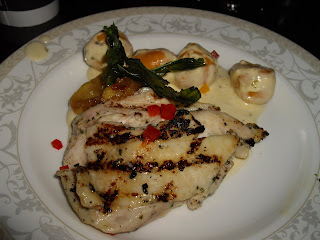 Next round, chicken. Chef Cathy delivered grilled petite chicken breast with sweet potato gnocchi with roasted apples and a tarragon cream sauce. Again, this was solid - chicken was perfectly cooked and moist, gnocchi had great flavor but maybe just a touch rubbery, and the cream sauce was yummy. Very satisfying, ate the whole plate up, but again, we just weren't wowed by anything surprising. Still it definitely ended up being the best of the chicken dishes. 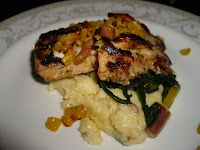 Chef Ben served up Caribbean Jerk Roulade with rainbow chard and country bacon polenta. This was disappointing - chicken was ok, but didn't have a whole lot of flavor. The polenta saved the dish, but then again, how can you screw up polenta with bacon? Roasted corn added a nice textural counterpoint to the creaminess. 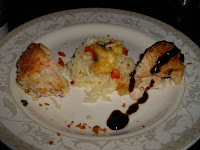 Third chicken dish was Chef Christopher's Macadamia Mango Chicken with rice pilaf. The judges of the event called this one "banquet food" - ouch, that hurts - but I have to agree. Chicken was dry, rice was bland. 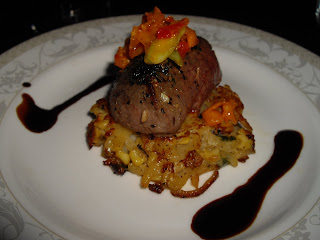 Last round, beef tenderloin. This time, Cathy's delivered -- herb-rubbed tenderloin medallions with grilled corn and caramelized onion potato galette with roasted yellow and red tomato compote. Even though totally stuffed, I had to eat this perfectly medium-rare piece of meat, and the potato cake was yummy. 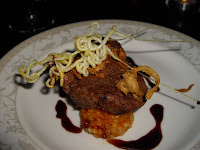 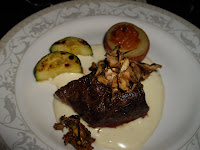 And Chef Christopher's last dish didn't help his score - beef tenderloin with candied mushrooms and brandy cream sauce. 1000yregg liked the sauce, but I found its sweetness cloying. And neither Ben nor Chris cooked the meat as well as Cathy.

So our total tally was Cathy 10.25, Ben 9.5, Christopher 6. Cathy also won based on the judges scores. We didn't always agree with their reviews -- none of them liked our favorite dish, Ben's scallop dish. They did have a point that it wasn't really ceviche, but if he had named it something else, maybe they wouldn't have quibbled. One judge in particular got on 1000yregg's nerves, so badly he had a tweet about it while we were there...

We were absolutely stuffed by the end of this. To be honest, I was actually glad that I didn't like some of the later dishes - and could happily not eat them. Next ChefAMe event is in November - can't wait!

Posted by fougoo at 9:43 PM 2 comments: Links to this post